It is often seen that many startup companies pitch their interestingly different products on crowdsourcing platforms online in order to gather popularity. One such latest campaign is from a company named ‘Symetium’ that is raising $1,250,000 for funding their so-called ‘The no-compromise Smartphone PC’. Symetium is a Sweden-based company and this project is very ambitious.

In terms of specs, Symetium’s desktop-like smartphone packs in a lot of interesting features. In case the company is able to raise the needed fund, the ambitious smartphone will be coming with 5-inch 1080p OLED display with a layer of Gorilla Glass 4 on it. The phone will sport Qualcomm-s upcoming high-end Snapdragon 820, coupled with 6GB RAM and 64/128/256GB native storage. Powering the phone will be a 4000mAh battery. 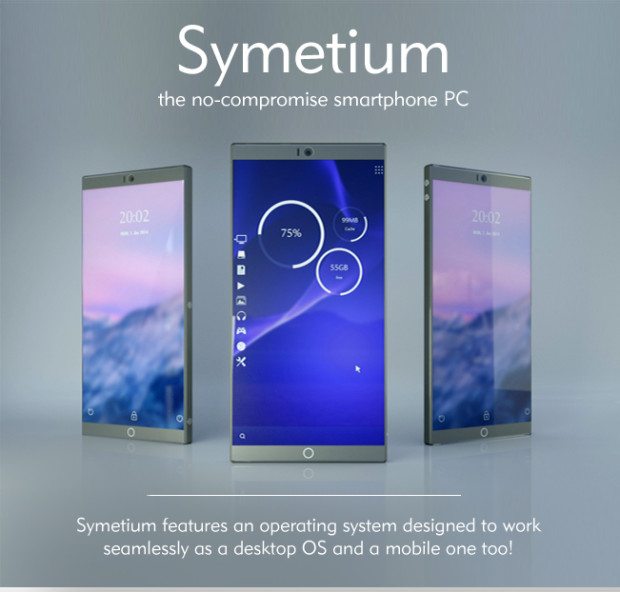 Talking about photography, the Symetium phone will feature a 24MP snapper at the back and aa 5MP shooter at the front. The 4G LTE-enabled phone will get front-facing stereo speakers. The phone’s dimensions will be 130 x 63 x 6mm and the phone will weigh 150 grams. The smartphone will be dust and water resistant with IP67 certification while featuring Type-C USB 3.0 port. The Symetium phone will run Android 6.0 Marshmallow out-of-the-box with Symetium’s custom skip on top of it.

Symetium’s Indiegogo campaign states that the smartphone will be able to stream its UI by connecting to multiple screens. The Android-based OS used in the phone has been named SymetiumOS and looks interesting in the pictures. The Type-C USB 3.0 port will allow you to connect the phone to a HDMI screen, and then you can activate the keyboard and mouse mode to use it like a desktop. Landscape and portrait modes will be available in the phone and the apps will be organized in different categories. The complete look of the SymetiumOS is something out-of-the-common.

Jonathan Gustafsson has been working for three years behind the design of this phone and he says that he wishes to create a fusion of mobile and desktop. He also states that the Symetium phone has been created to be a 5-inch computer and can be used without a SIM card too. Check out the Symetium photos and videos below.