Video games have been used to mock politicians in the past and the trend just got a facelift. A new browser-based game lets you drop a tree stump on Republican frontrunner in the upcoming US election and his death is painted in blood and gore. 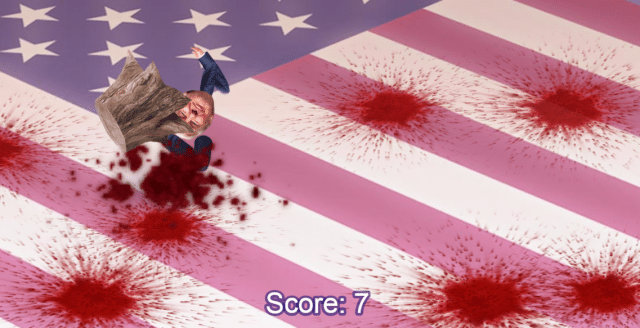 Surprisingly, liberals, progressives, right activists and fellow republicans who have openly showed their rage for things of such sorts have kept quiet. A similar amateur video game titled ‘Beat up Anita Sarkeesian’ some years ago targeted a feminist provocateur Anita Sarkeesian. The game allowed players to punch a picture of her till she is blue on the face. This sparked a progressive-feminist outrage. There was another protest some time ago by feminist against the Barbie doll.

The game on Anita sparked outrage from feminist and was labelled as one of the clear cases of societal misogyny. The game got a lot of condemnation and feminist activist ganged up to ruin the life and career of the young game developer who created the game.

‘Stump the Trump’ in like manner is an open show of violence and dislike against the republican frontrunner, Donald Trump.  The browser-based game is a side scroll. Players have to stop a horde of Trump from crossing the screen by smashing them with large tree stumps. If one Trump goes through the screen it is game over for you. You can kill more than one Trump with a single tree stump and the more you do, the higher your score climbs.

Once the stump falls on Trump, he is reduced to a bloody pulp and his limb goes flying everywhere. The game can be played on www.stumpthetrump2016.com. Inasmuch as the game is not strong enough to spark any form of violence, ‘Beat up Anita Sarkeesian’ was also not much of a threat, putting a question mark on the underlying cause of outrage and activities of social justice drummers.