At BlizzCon 2016 in Anaheim, California, Google announced their collaboration with Blizzard Entertainment to open up StarCraft 2 to AI and Machine Learning researchers around the world. We would also love to see deepmind in WoW. AI immersed in a virtual world from a third person perspective, leveling and solving quests. Sounds like training for a real world AI.

StarCraft 2 is using Google’s DeepMind to train its AI

The game’s default AI was actually cheating in the way that it could control multiple groups of units at the same time while a normal player could not. This is because it was not elaborate enough to make overly complex strategies. Deep Mind is restrained by the same constraint as human players but is looking to actually learn strategy and forethought.

This is extremely exciting. We’re really interested in seeing AI become better in video games in general. Also, we’re curious how they’ll work around the AI becoming too predictable for a human opponent that constantly harasses it and abuses its systematic decision making (e.g. in Warcraft 3 you could make the AI cancel its buildings many times by attacking it as soon as it starts construction). It would be awesome to get some updates on this every so often, to follow the development process.

We still don’t know whether they will be limiting the APM to within human capacity. There have already been AI designed for StarCraft 2 with 30,000+ APM making them capable of controlling each unit individually, allowing the AI to win off micro alone. We assume devs would not want this. So, it raises the question that what will APM be limited to.

Anyways, stay tuned to MobiPicker for more news and updates about Google’s DeepMind use in video games. StarCraft 2 also introduced a new co-op commander, so be sure to check that out as well. 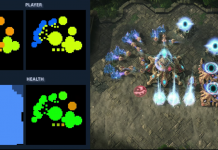