The upcoming installment in the critically acclaimed Star Wars film series, Star Wars Episode 8, also known as The Last Jedi, is said to release at the end of this year, and fans are all hyped up for it. It is without any doubt, one of the most anticipated films of 2017. However, while fans wait for the film to arrive, many rumors regarding what it will feature surfaced, thus giving an increase to its hype. Recently, it was reported that Luke Skywalker and Rey are going to be the main focus of the film as the relationship between them is said to be detailed in it.

A few days ago, during the Disney investors’ conference, the very first footage of the upcoming Star Wars film was showcased. The clip is not widely available yet, but Slash Films managed to gather some details regarding what the footage featured. The footage kind of increased the hype of the film as it revealed something related to Luke Skywalker and Rey. It was revealed that Rey will continue to use Luke’s lightsaber. However, one day, Luke will spot Rey while she is using the lightsaber. The footage does not reveal anything further.

What the footage revealed suggests that Luke and Rey are going to do a lot of things together in the upcoming film, such as training together. Fans might even get to know about their relationship more. While talking about the role of Luke and Rey in the upcoming Star Wars film, director Rian Johnson claimed that they are going to develop a strong bond this time. He further stated that the film will focus more on what has been going on with Luke. 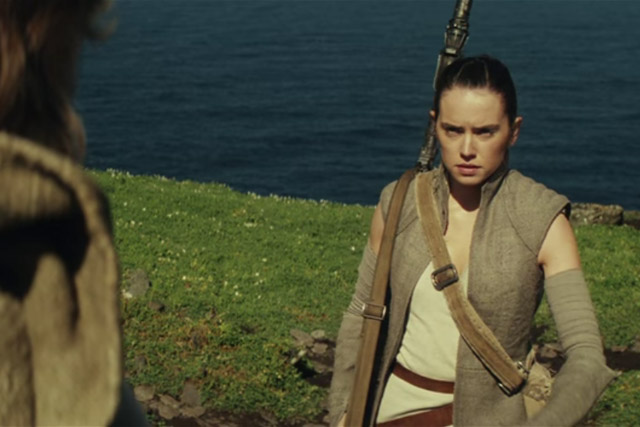 Along with this, the upcoming Star Wars film is also said to reveal the identity of Supreme Leader Snoke. Currently, many fans are eagerly waiting to know who he really is, and they might get their answer in the upcoming film. On the other hand, a few weeks ago, we reported that Star Wars Episode 8 might also focus on the past of Kylo Ren. The very past which is filled with hatred and violence. Whatever the case is, the film is definitely going to be an amazing one as it will be filled with a lot of surprises.

Star Wars Episode 8 is currently scheduled to release on December 15, 2017. Let us know if you’re excited about it or no tin the comments below.