A brand new, never before seen imperial soldier called the “Imperial Ground Crew” has been spotted as a Hasbro toy. So could this mean we will see this new Imperial Ground Crew member in Rogue One? We also discuss more customization options for the shoretrooper, who appears to come in two different variations. And we cannot forget about the Rebel’s Gigorian Fighter. Recently he made his way into Star Wars Commander so could he appear in Star Wars Battlefront Rogue One Scarif DLC?

Star Wars Battlefront Rogue One Scarif DLC – All the possiblities

“Imperial installations, whether space-bound or ground-based, buzz with activity and vehicular traffic. Skilled ground crews sort through this would-be chaos and see to the smooth operation of Imperial craft through regular maintenance. Experience the imposing threat that is the first Death Star, and enforce the will of the evil Empire led by the dreaded Darth Vader!

Relive the moments of climactic battle with this 3.75-inch Imperial Ground Crew figure from Star Wars: Rogue One, and collect and do battle with these and other figures and vehicles from Hasbro Star Wars”

He looks like a mix of a Death Star trooper and TIE fighter pilot. The two objects in his hands appear to be batons. So, he’s basically the soldier who will stand and direct the TIE star fighters. He has a pretty important role when it comes to the Navy.

We could also see additional customization for the Shoretrooper. The movie-accurate collectible figure is specially crafted based on the image of the Shoretrooper in Rogue One: A Star Wars Story, featuring a highly poseable new body with a distinctive helmet, all-new armor with weathering effects, a new blaster rifle, detailed utility belt with pouch and other accessories, plus a specially designed figure stand.

Let us know your thoughts on the Star Wars Battlefront Rogue One Scarif DLC. 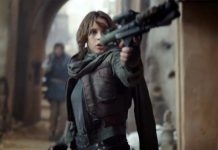