As you probably know by now, Rogue One trailer dropped recently. It was the last trailer we will see before the movie releases in December. It was awesome and definitely the best trailer. However, the trailer might also provide some news about the upcoming Star Wars Battlefront Rogue One Scarif DLC. We can’t help but wonder what the new DLC would look like.

Scarif is a very tropical environment. We love how there are smaller islands surrounded by shallow bodies of water. In our opinion, you should be able to wade through the water. We’ve seen Stormtroopers do that in the trailer. Now what kind of mode could complement this map since it’s so large?

Something like Conquest, Turning Point or Walker Assault would complement the map a lot. It would be perfect for large scale battles with vehicles. We want tanks to return to Battlefront. The original Star Wars Battlefront had a rebel combat land speeder as an Imperial tank. Rogue One hover tank has been shown plenty of times in the trailer. So, we definitely think tanks could be making a return to the game. Since this will be a Hover Tank, it could go over water and land both.

The brand new U-Wing could be the secret Rebel weapon we’ve all been speculating for so long. It’s a transport ship which can haul multiple people across the map. DICE can put guns on it, so it becomes an armed troop carrier. This would see a return of co-op vehicles to Battlefront.

We’re convinced that DICE will introduce a brand new game mode to the Star Wars Battlefront Rogue One Scarif DLC. They’ve done this before with previous DLCs for the game. Let us know your thoughts about the upcoming DLC. 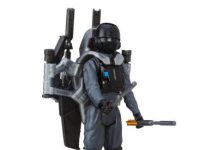