MobiPicker
Tech Hardware SSD Prices Go Down, Gets Close To HDDs
Share on Facebook
Tweet on Twitter
Deal Alert: 49% Off on ExpressVPN
Touted as #1 VPN in the world, ExpressVPN is now offering 49% off & an additional 3-months of service on its annual plans.

From the last quarter, there has been a decrease of 12% in the price of solid-state drives (SSDs) paid by the computer manufacturer. The most preferred drives are now pretty close to their hard disk drive (HDD) counterparts in terms of pricing.

DRAMeXchange, a division of TrendForce noted a decline of 10%-to-12% and 7%-to-12% in prices of MLC-based and TLC-based SSDs respectively in the first quarter of 2016. 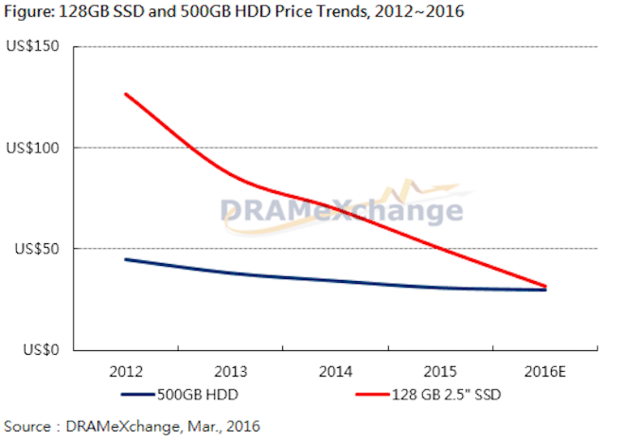 SSDs with capacities from 250GB to 500GB are expected to grow at the highest annual rate between 2016 and 2022 in the market.

Still, the prices of TLC (Triple-Level Cell) didn’t fall as much as MLC (Multi-Level Cell) since most SSD manufacturers are just starting to ship their TLC products (Samsung being the exception).

The adoption rate for SSD in laptops is expected to increase by 30% this year with total growth of 9.5% a year through 2022 from $13.29 billion to $25.3 billion, according to a report released today by MarketandMarket in India.

MarketandMarket says, “Reasons for SSD growth amounts to cloud computing, performance advantages of SSDs over HDDs, an increase in the number of data centers, and rising big data applications.”

SATA interface, which allows notebook and desktop users to make simple changeovers from HDDs to flash will make for the largest share of the SSD market over the next six years.

That said, the market for SSDs with PCIe interfaces, which are used by laptop makers such as Apple to attach flash directly to a motherboard, is expected to grow at the highest annual growth rate ever over the next six years.

Overall, with such a trend in price drops of SSDs, we aren’t far away from the day HDDs become history in the PC World.