Squadron 42 is a single-player campaign for Star Citizen. A first person shooter space sim hybrid. It is created in a modified CryEngine. The vision of Chris Roberts, the creator of the Wing Commander series and, it is the most crowdfunded video game of all time. The single-player campaign revolves around Vandals attacking human worlds. But there is more to this story. With so much work load on the developer, they have now suspended the single player campaign of Star Citizen indefinitely.

Squadron 42 has been delayed indefinitely

“Chris Roberts and Cloud Imperium Games made the delay announcement during a livestream, stating that while a lot of the basics were complete, a great deal more had to be done. This includes in-progress development on things like pathfinding logic, enhanced flight AI, and the mission integration system.

The campaign’s 28 missions are simply not done yet, according to Roberts, with some still at the grey-box level. The developer has been notoriously quiet about a release date—up until now, while very little from the campaign had been shown, CIG had still not pushed back the 2016 release window.

2017 is now the target, but I won’t be holding my breath until a great deal more of Squadron 42 is on the table.

On the other hand, much of what was shown at CitizenCon looked very impressive, especially the giant sand worm (around the 1:54:00 mark in the below video.)”

You can read the rest of it on Forbes. The livestream for the game showed some impressive gameplay features. We just can’t wait for the an official release date so we can try these out finally.

Stay tuned to MobiPicker for more news and updates regarding Squadron 42. 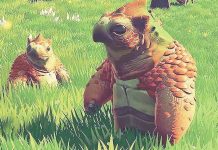 Star Citizen Changes The Way How It Will Be Sold