MobiPicker
News Spice Xlife 511 Pro Launched at Rs. 5,299 with Free Selfie Stick...
Share on Facebook
Tweet on Twitter
Deal Alert: 49% Off on ExpressVPN
Touted as #1 VPN in the world, ExpressVPN is now offering 49% off & an additional 3-months of service on its annual plans.

The Indian Mobile manufacturer company – Spice has launched a new smartphone with impressive specs sheet, beautiful design and an affordable price tag of Rs. 5,299. This phone is available at online retailer Flipkart and comes with a free flip cover and a selfie stick. 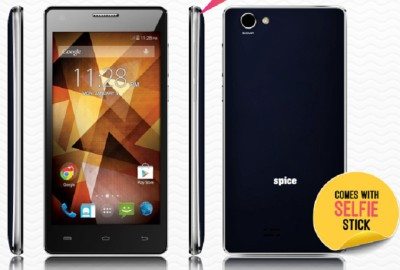 Specs-wise, the Spice Xlife 511 Pro sports a 5- inch display with a resolution of 540 x 960 pixels, and is powered a 1.2GHz Quad-Core Processor. It packs 1GB of RAM, 8GB of onboard storage, which is expandable up to 32GB via microSD card. A 1,750mAh battery lights on the handset.