The OnePlus 3T is one of the fastest smartphones at the moment with a price tag that’s quite lower than you have to pay for the Google Pixel XL or Samsung Galaxy S7 Edge. Can OnePlus 3T match the two devices from Google and Samsung? PhoneBuff decided to check how fast the three models are by running a speed test.

The test included opening a series of apps, after which each model had to transcode the same video file with the help of a video editing software called VidTrim Pro. Let’s see which one wins. 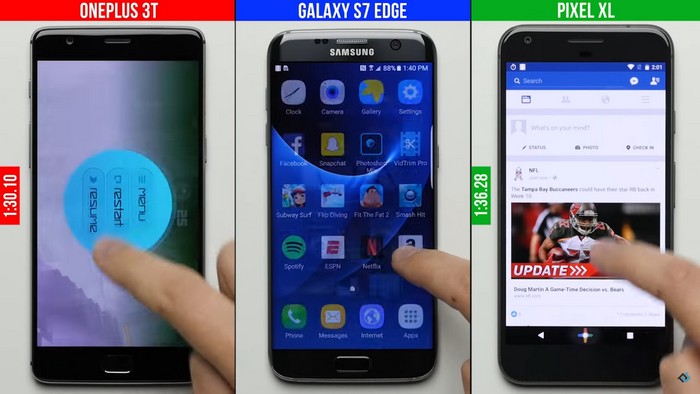 The phones had to finish a couple of laps opening the apps and transcoding the video. The Google Pixel XL had a slight advantage over OnePlus 3T at the beginning of the first lap, but as more and more apps got opened, OnePlus 3T managed to take the leading position, ending the first lap in one and a half-minute. The Google Pixel XL finished second, with a lap result of one minute and thirty-six seconds. As for the Galaxy S7 Edge, it was clear from the start that the flagship device from Samsung will fall behind the other two; it ended the first lap in one minute and fifty-five seconds, way behind the other two.

The OnePlus 3T finished both laps in just one minute and fifty-three seconds (that’s faster than the Galaxy S7 Edge needed for just one lap). The Google Pixel XL finished on the second place with two minutes and fifty-seven seconds. The Galaxy S7 Edge finished last with a time of three minutes and fifty-one seconds. As you can see, the OnePlus 3T is the fastest even though it sells for way less than the other two models.

Since the Galaxy S7 Edge features an older chipset, the Snapdragon 820, it was expected for it to come last. On the other hands, both OnePlus 3T and Google Pixel XL feature the latest Snapdragon 821, which showed to be visibly faster than the 820. On top of that, the Galaxy S7 and the Pixel XL pack 4 GB of RAM while the OnePlus 3T features a whopping 6 GB of RAM. If you want the fastest phone, it seems the OnePlus 3T is the best choice, especially if we consider the price.

Other two models still have lots to offer. The Pixel XL has the best update support, and both have awesome cameras. The Galaxy S7 features dual-curved screen, a unique feature among the three. No matter which one you choose, you won’t make a mistake, but if the speed is all you look for, go for the OnePlus 3T.