Elon Musk’s SpaceX is unstoppable. The company has been setting newer standards when it comes to launching rockets. SpaceX has already succeeded at something experts long believed couldn’t be done. SpaceX’s historic Falcon 9 launch is a huge one – launching a flight-proven Falcon 9 core stage and landing it again on the ASDS barge is an accomplishment SpaceX will be long remembered for. Recently, SpaceX entered national security arena by launching the first ever spy satellite. Falcon 9 carried a spy satellite called the NROL-76 for National Reconnaissance Office (NRO). SpaceX is now gearing up to launch the biggest and heaviest rocket ever built. 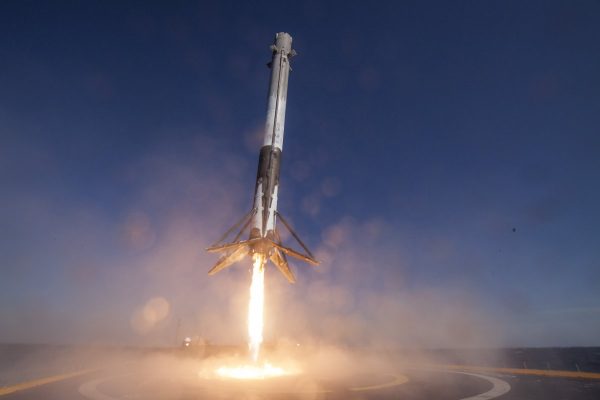 SpaceX is already working aggressively on test firing its Merlin engines. The engines are for Falcon Heavy, SpaceX’s biggest and most powerful rocket ever built. Elon Musk is quite confident that Falcon Heavy launch will proceed as expected. In fact, given the aggressive timelines SpaceX is working on, the launch could happen in the next four months.

Elon Musk is active on twitter and usually responds to questions about SpaceX’s upcoming launches and other plans. When asked on twitter to talk about when Falcon Heavy will launch, Elon Musk responded by telling that all Falcon Heavy cores will be ready in two to three months and the launch should happen a month after that. So it’s fair to expect the launch to happen within four months from now. 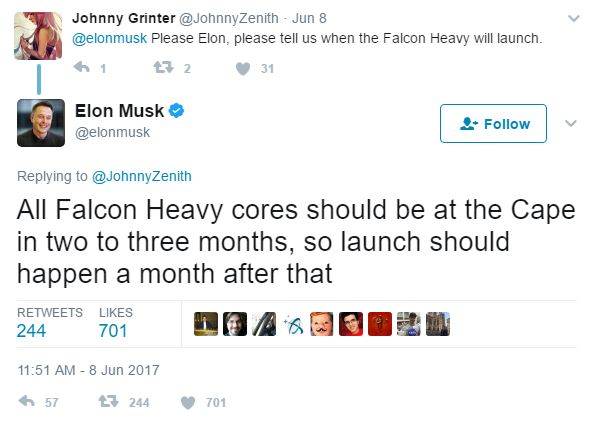 “Please Elon, please tell us when the Falcon Heavy will launch”

“All Falcon Heavy cores should be at the Cape in two to three months, so launch should happen a month after that”

Apart from Falcon Heavy, SpaceX is also reportedly working on launching more than 4,000 Broadband Satellites starting 2019. The satellites will launch from Falcon 9 rocket beginning 2019 and continue launching in phases until the full network comes online in 2024. The company is expected to begin satellite testing in the coming months, following up with a prototype launch later this year and another in the early months of 2018. These prototypes will be used to demonstrate that the custom-built craft is capable of providing the internet for Earth, but assuming the tests go successfully, SpaceX plans to start building the network system in 2019.