As reported earlier, the Japanese company has officially announced the Sony Xperia Z5 and the Xperia Z5 Premium in India at Rs  52,990 and Rs 62,990, respectively. The Premium smartphone will be available next month on November 7, while the Xperia Z5 can be purchased just after 2 days i.e. October 23rd. Currently, the company has no plans for releasing the smaller Z5 Compact in India. 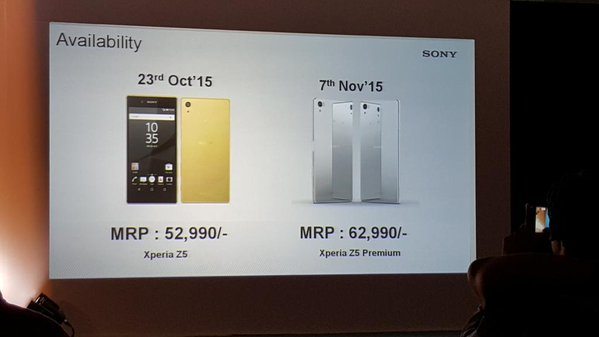 The standard Xperia Z5 is kind of an upgrade to the Xperia flagship series, while the Z5 Premium takes things to next level on the display front. Undoubtedly, both the Sony smartphones will face higher completion in the already crowded market, and the closest rivals will be the Samsung Galaxy Note5, iPhone 6s, and the Google Nexus 6P.

For those are not aware, here is a quick specs recap.

The Z5 features 5.2-inch full HD (1920×1080 pixel) Triluminos display and is powered by the not-so-positively reviewed Snapdragon 810 chipset, coupled with 3GB of RAM and an Adreno 430 GPU.

In terms of camera, the phone comes with a 23-megapixel rear snapper with 4K video recording support. For selfies, you get a 5.1-megapixel camera with Full HD video record.

Running Android 5.1 Lollipop, the flagship packs 32GB internal storage with expandable support up to 200GB. A 2900mAh battery powers the phone. It also boasts a fingerprint scanner embedded in the power button.

The Z5 Premium sports a 5.5-inch 4K Triluminos display, which works out to a whopping 806ppi pixel density. Qualcomm’s Snapdragon 810 drives the smartphone, similar to the Xperia Z5. Other features are also similar, including 3GB of RAM, 32GB of internal storage (expandable up to 200GB), 23MP rear camera, 5.1MP front shooter, and Android 5.1.1 Lollipop. In terms of power, the Z5 Premium gets a slightly larger battery – 3430mAh.

You can also check a quick review about Xperia Z5 heating issue, and Camera Samples by a Z5 User.