It is confirmed that the Japanese company is not set to unveil its upcoming flagship Sony Xperia Z4 at upcoming MWC event. However, it doesn’t mean that company don’t have anything in the stores to bring for us. Two recent leaks suggest that the Sony is all set to announce Xperia Z4 Tablet and Xperia M4 Aqua in Barcelona. 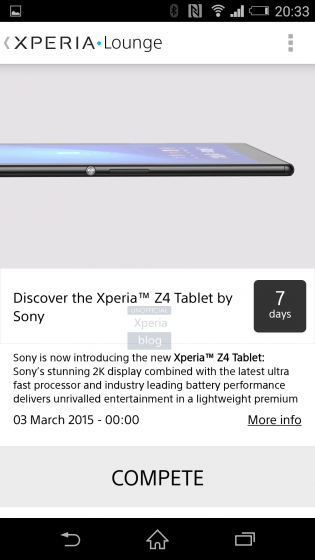 The Xperia Z4 tablet leaks out on the official Xperia Lounge application, now pulled back. The leak doesn’t confirm the specs of the tablet, but the screenshot points to a 2K display, an high-end processor, and improved battery experience. Further, the Z4 tablet gives a very similar to Xperia Z3 with rounded metal edges.

The Sony Xperia M4 Aqua – an successor to Xperia M2 Aqua, is another device to join the event with Z4 tablet. A leaked document confirms the existence of the smartphone.  The device should carry IP68 certification for water and dust resistance, like its predecessor.

Unfortunately, there are no specs to confirm at the moment. But, we are now just 3 days away from MWC to explore more on the devices. Stay tuned, stay updated.

If you are not aware, the Samsung Galaxy S6 and HTC One M9 are also set to unveil at MWC on March 1.