After a long time of wait, the rumored Sony Xperia Z4 is now formally unveiled. The new flagship phone will be the successor to Xperia Z3 but only in Japan, at least for now.

The Xperia Z4 comes with a little tweaked OmniBalance layout with 6.9mm thickness with a metal frame all around the sides. The Z4 brings the IP68 certification, similar to Xperia Z3 for dust and water resistance.

on the rear side, the Xperia Z4 features a 20.7 megapixel snapper with Exmor RS image sensor along with the BIONZ image processing engine. Dressed with the G Lens, the 1/2.3-inch image sensor offers responsiveness up to ISO12800 to shoot well exposed pictures in poor light conditions. The company has also added a new ‘Cooking Mode’ on Z4 to click tasty shots of your food. 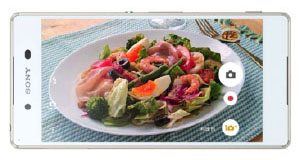 The front is garnished with a 5 megapixel wide-angle unit with Exmor R sensor which is perfectly optimized for the purpose of selfies.

Currently, the phone is launched only for the Japan and there is no word on global roll-out and pricing.