There are reports that Sony’s midrange smartphones may soon get an Android Lollipop upgrade which has been confirmed in one of the replies to Xperia T3 owner by Sony Mobile’s French division.

Luis Hern, @urgeunpsicolog, has put forward his query that whether his device will get any update or not and as per Sony France confirmed the company will roll out the Android Lollipop 5.0 to the Xperia T3 in a few weeks time. 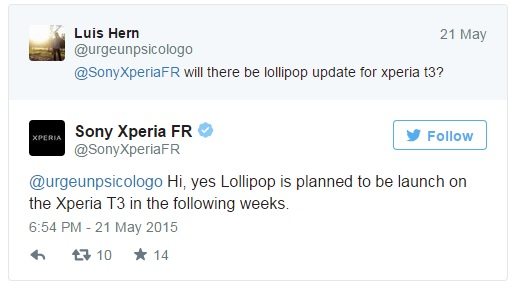 Xperia Z series which includes Xperia Z, ZR, ZL and Tablet Z, have received the OTA updates for Android Lollipop last week. With an affirmative answer to the query, Sony has given a pleasant surprise to Xperia T3 owners, where as earlier Sony has not confirmed Lollipop update except for Z series.

However, it is quite possible that not only Xperia T3 but other mid-range smartphones of Sony will get this sweet Android Lollipop soon. The new version of Android will bring “Material Design” interactive UI with animation, improved graphics and notifications on locked screen. There will also be an expected performance upgrade and battery life enhancement when the default runtime will be changed from Dalvik to ART.

The option of transferring the apps from phone flash memory to SD card will be a boon to mid-range smartphone owners, as they can save on some amount of flash memory which will in turn improve the performance a little bit.

Update – Sony France has removed the tweet for now.