Song Joong Ki & Song Hye Kyo breakup rumors are currently making the headlines despite the fact that the on-screen couple never ever accepted their affair. The sources report that the “Descendants of the Sun” couple broke up because the actress was jealous of a mystery girl who was along with her co-star in an Instagram post uploaded by Joong Ki himself.

It is a known fact that as of now Song Joong Ki and Song Hye Kyo are the topmost stars not only in South Korea but also in Asia. Their series made them a household name across all the Asian countries, says The Christian Post. But naturally, any news regarding these two stars is big enough to attract attention.

Fans have been speculating about their affair since a long time. But now the rumors about their breakup have stunned everyone. The rumors triggered off after the actor loaded a post featuring him with a mysterious woman on the Instagram account. 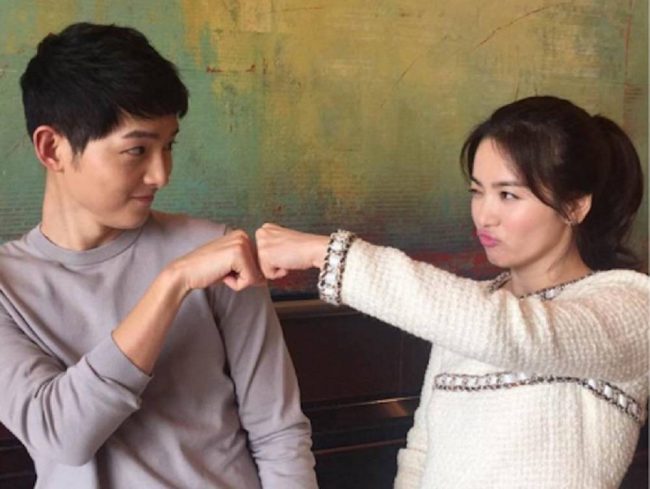 Incidentally, viewers cannot see the face of the unidentified girl as it has been hidden using an emoticon sticker. The cropped photo, however, reveals something else that has made everyone suspicious about her illicit association with Joong Ki.

The girl in the picture is having a baby carrier bag on her back which made the fans speculate that she is the real girlfriend of the “Descendants of the Sun” actor and her baby has been fathered by none other than the Asian superstar, reports Korea Portal [KP has taken down the page now].  According to the source, fans believe that the girl caused a fight between Soong Joong Ki & Song Hye Kyo and they have decided to part ways.

However, there are more positive speculations that indicate that the girl might be someone in the family who does not want her identity to be revealed.

Will Joong Ki And Hye Kyo Come Together For Another Project?

The source also says that there is a strong possibility that these two stars might reunite once again for another TV project. According to reports, Song Joong Ki  & Song Hye Kyo will be coming together in the sequel to “The Heirs”, a blockbuster series of 2013.