The recent releases of Qualcomm’s Snapdragon 820 and Samsung’s Exynos 8890 have created quite the hype in the smartphone arena. And it’s quite obvious that these chipsets will probably be at the heart of the upcoming smartphones lined up for release. Even though Qualcomm has been feeding us bread crumbs throughout 2015, the details of the Adreno 530 GPU were finally unveiled today. 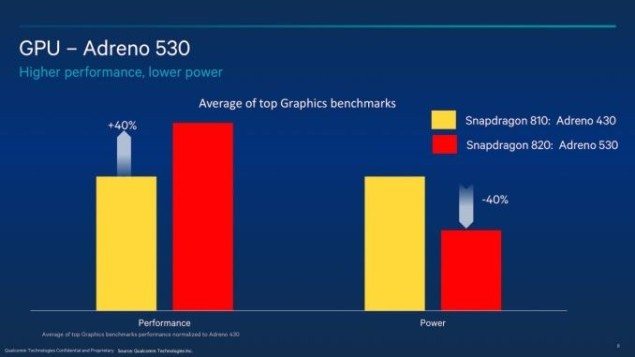 Snapdragon 820 has made a mysterious step-by-step appearance, and its latest one emerged today in the form of the upgraded and improved Adreno 530 GPU. It is said that the 530 offers a 40% boost in performance compared to its Adreno 430 predecessor. Qualcomm has been doing a great job with their GPUs, and if this comes out to be true, then they’ve outdone themselves once again!

Sources from China claim that the Adreno 530 GPU managed to outperform the Apple A9 GPU, carried at the heart of Cupertino’s famous pair: the iPhone 6s and iPhone 6s Plus. Qualcomm has had time on their side ever since we’ve heard about Snapdragon 820, so it would be no surprise if these rumors turn into facts.

Snapdragon 820 marks a new era for the US chip manufacturer, as they decided to lean towards heterogeneous computing this time, due to the tighter integration of the DSP, GPU and the custom Kryo cores. Devices wearing this CPU might hit the markets as soon as the beginning of 2016 and we cannot wait!