MobiPicker
Tech Hardware Snapdragon 820 is 50% More Powerful Than Exynos 7420 – Analyst
Share on Facebook
Tweet on Twitter
Snapdragon 820 has been in the news lately for being touted as the best smartphone chipset till date, and even though it is far away from being released, news and rumors about it never seem to stop. The latest report comes from Pan Juitang, a Chinese analyst, who claims that the Snapdragon 820 will be faster than the Exynos 7420 chip used in Galaxy S6 series and Galaxy Note5 this year. Apparently, SD820 shows 50% more performance than the Samsung chip, which makes the upcoming Qualcomm chip even more promising. 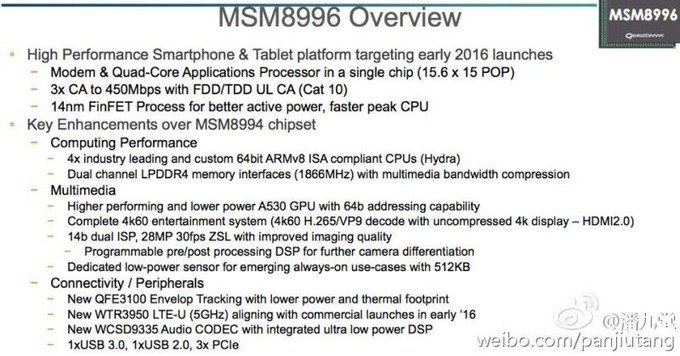 As of now, Samsung is said to be producing a new Exynos M1 chipset that will power its Galaxy devices in the Asian market, while the company will use Snapdragon 820 for US and China. Coming back to SD820, the chip supports Cat 10 LTE for up to 450Mbps download speeds, support for 4K video playback @60fps, pre/post-processing camera DSP that is programmable, and a low-power sensor to increase battery life. All this tells us that Qualcomm is leaving no stone unturned to bring the best technology on the table with the Snapdragon 820.

Manufacturers have already started testing out the SD820 in their upcoming flagships to uncover the true potential of the chip. Qualcomm China’s President Frank Meng has said that the Snapdragon 820 has been powering around 30 smartphones that are still in the design or planning phases. SD820 is expected to ship in early 2016, so the wait is going to be very exciting.