It would come as a surprise to many people that the so-very-popular Snapchat app is not officially available for Windows Phone devices. The absence of an official Snapchat client has led to the rise of Specter, an unofficial Snapchat Client for Windows Phone platform. Though third-party replacement apps are prohibited in the Windows Store, Specter has managed to survived till now, and it keeps receiving updates from its developers regularly.

One of the most important updates that Specter could received has been released today, and the latest Specter update brings support for Windows 10. So now Specter works with smartphones as well as PCs that are running the latest Windows 10 OS. So if you have got a Lumia phone or Windows PC running Windows 10 and want a Snapchat app client, you can download Specter from the Store. 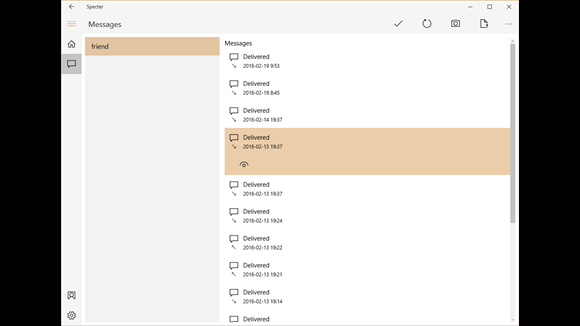 We don’t know whether Specter will stay in the Store for long, as Snapchat does not seem to be in a mood to make its services available to Microsoft and Windows Phone particularly. The developer of Specter, in the description of the app on the Store, that some features of the app might not work properly.

Please note that this is an early preview of the application (not all features must always work – but they should, so write an e-mail to [email protected] if you have any problems). Currently, the app only allows you to log in with an existing account and then send and receive messages.

If you ever wanted to use Snapchat on Windows, this is your chance, as Specter might get removed from the store if Snapchat officials think it through.