Slither.io fulfills your lifelong dream of becoming an ever-enlarging snake as you compete in a snake-eat-snake world full of delicious-looking orbs. But it’s easy to get overwhelmed in this online multiplayer game, where your survival can often be short and brutal. Here’s a few pointers on just how you play the game and what you can do to up your chances of surviving. Also, how to unlock skins! 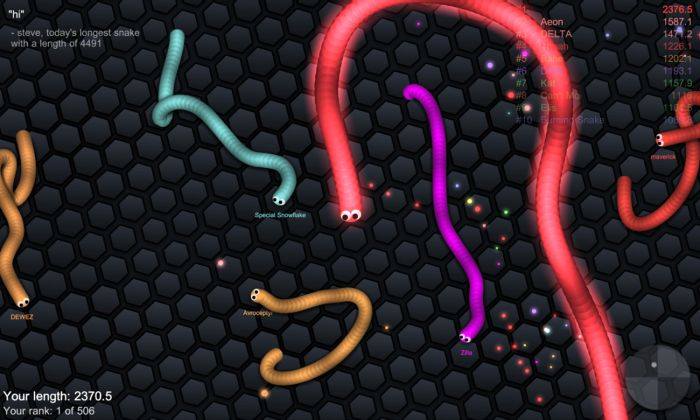 The world of Slither.io is peppered with little orbs that you you need to eat up in order to grow big and strong. You can tap or click on your screen to change your snake’s direction, but you cannot make it pause or stop, so you’re always on your feet. Well, maybe not on your feet, but you know what I mean.

If the head of your snake hits another snake, you lose, just like the classic game Snake. Your head can, however, touch your own body, in which case it will simply overlap your body. If another snake’s head hits your body, it will die and you will be unaffected. The goal of the game is simply to become as big as possible by eating as many orbs as you can – for which killing other snakes can be a major boost.

The key strategy to winning in Slither.io is to encircle your opponents, trapping them and forcing them to ram into your body and die. Once they’re dead, pick up all their goodies and grow big. You can also boost in the game by double tapping on the screen, which can be handy when you need to get to an orb fast, or want to overtake an opponent.

Did you know that Slither.io also has skins for your snakes? You can pick these from the main screen if you’re playing on iPhone or Android. On the PC, however, the process is a bit more involved, according to GottaBeMobile. You need to share on Facebook or Twitter via the main Slither.io screen (or by clicking on ‘Share’ and then cancelling the share) to get skins if you’re on the PC.

What do you like the most about Slither.io? Let us know in the comments below.