Once, there was Agar.io. And then someone decided to turn it into a game of multiplayer Snake (yes, that old game for Nokia phones), and out of this mysterious fusion was born Slither.io. Here’s what you need to know about how to play Slither.io, what tricks you can use to your advantage, and how you can use skins. 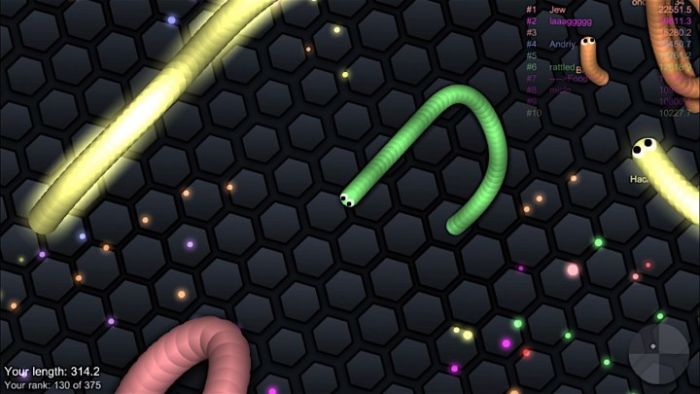 How to Play Slither.io: It’s pretty simple, really. You’re a snake, and you’re pretty hungry. Your job is to guide your snake around the map, eating up all the orbs you can find. Tap or click on the screen to move. This being a multiplayer game, you can’t pause Slither.io. If you bump into another snake, you will explode and die. If another snake bumps into you, they will explode and die. If you double-tap or double-click on the screen, you get a speed boost, which is handy for overtaking other snakes. There’s no real ‘victory’ condition in Slither.io, so your goal in the game is just to become as big as powerful.

Tips and Tricks for Slither.io: The key strategy to Slither.io is encircling your opponents, forcing them to bump into you and explode, so you can grab their orbs and grow big and strong. This can leave you vulnerable, however, as a coiled snake is an easy target for a bigger snake looking to encircle you in turn. Also, remember to use the boost! You can use it to jump in front of bigger snakes to have them explode. Finally, follow the big snakes and wait for them to die. When they do, you’ll have a lot to eat up.

Skins: On PC, go to the main Slither.io screen, and share on Facebook or Twitter to unlock skins. You can cancel the share after clicking on share and still get skins. On iOS or Android, you get a skins option on the main menu itself, and you don’t need to unlock this feature especially.

Are you playing Slither.io? Let us know what you think about it in the comments below!