Slither.io has slowly been increasing in size, eating up orb-shaped players to take on the leading game in the ‘eat-to-get-bigger’ genre of multiplayer games, Agar.io. Slither.io essentially takes Agar.io, and crosses it with good ol’ fashioned Snake to create an addicting and even thrilling combination. If you’ve been playing it for a while, you probably envy the huge snakes that tunnel their way through the playing field, eating up dead snakes. Here’s what you can do to become more like them. 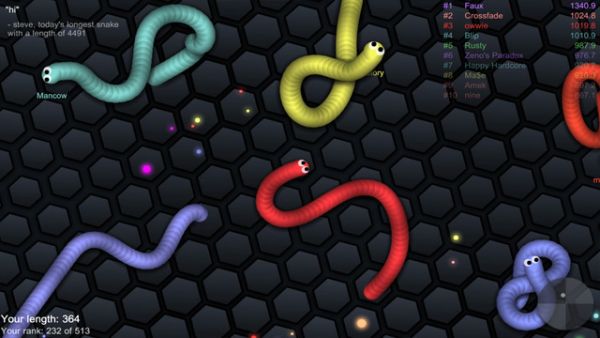 Don’t worry about colliding with yourself. Unlike the original Snake, you can’t eat yourself, so you can roll on top of yourself with no penalty whatsoever. This is not only a convenience, but an actual gameplay benefit, as this will allow you to perform the most important tactic in the game, which is…

Encircle smaller snakes. Form a circle with your body around a smaller snake, and spiral inwards. This will force the smaller snake to bump into you, while protecting its shiny carcass from outside predators. Snap up all the shiny orbs left behind, and be on your way, longer and bigger than ever before. Be careful, however, as forming a circle puts you in the perfect pose to be encircled by a larger snake yourself.

Boost when your small, don’t when you’re not. When you’re small, use the boost to jump forward and get an edge any rivals chasing after same orbs as you. Keep in mind, however, that you will lose some of your own length when you use the boost, so avoid doing this when you’re a bigger snake. Do you have more tricks up your sleeve? Let us know in the comments below.