This is a feature found in a good chunk of modern games, including Fallout 4. But it is especially effective in the world of Skyrim. Rain Occlusion makes sure rain and snow don’t clip through walls. Those who used mods on previous Skyrim would remember using Real Shelter mod to get fake rain occlusion.

You can now walk around and enjoy the view distance in its intended glory. It’s more stable than it ever was before. This is partly due to the 64-bit nature of the new engine which allows the game to use more memory.

Not only is your game less likely to crash but it also allows multiple objects on your screen at once. Simply spawn 200 Imperial soldiers via console and check to see whether your game lags or even crashes.

It’s a lot more improved over the previous game. Water now flows more realistically. Previously, the water flowed in one straight direction regardless of any twists and turns but now that’s not the case anymore.

And finally, you can now loot the executioner for his hood when escaping Helgen at the beginning of Skyrim Remastered. You can check out a more detailed insight into all this by watching the video below.

Even though Skyrim may be missing a key feature like Survival Mode, it’s good to see the game improve in so many other ways nonetheless. You can check out a more detailed insight into all this by watching the video below.

Skyrim Remastered Features and Update – Here Is A Complete List of Features That Are Coming and Also A List of Rumored Features Not... 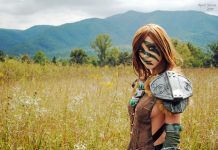 Skyrim Remastered Better Than Fallout 4? Here’s What We Think