TV anime series ‘Rewrite’ is scheduled to return next January. The second season of the series will be aired on Tokyo MX. It will also be broadcast on BS11, MBS, and other channels. The first season of the anime series concluded on September 24. It was first aired on July 2, earlier this year.

The anime is based on the visual novel of the same name. The novel was developed by Key, a brand of VisualArt’s. The story of the novel revolves around Kotarou, a high school student in Kazamatsuri. The town is permanently overgrown with vegetation. However, Kotarou has access to an alternate dimension of the town. The female protagonist of the series is Kagari, who can initiate a period of re-evolution. The series also follows the war between Gaia and Guardian.

The anime series was directed by Tensho and its screenplay was written by Takashi Aoshima. The characters for the series were designed by Masayuki Nonaka of The Fruit of Grisaia.  It is expected that the DVD and Blu-ray compilation volumes for the series will be released by March 22, 2017. While the series is based on the gameplay, it also contains a ‘sixth’ route which is not shown in the game.

In the series, Masakazu Morita plays the role of Kotarō Tennōji while Chiwa Saito has been cast as Kotori Kanbe. Kana Hanazawa takes on the role of Kagari.

The Rewrite is also scheduled to be released for PlayStation 4. PS4 version will also contain the content of Rewrite+, which includes revised game scenarios and better sound effects. There are also additional illustrations which were not in the original game. The game has already been ported to PS Vita and PSP systems. The PlayStation 3 version was released in February 2015. 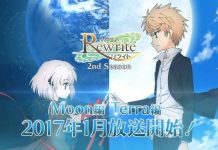