MobiPicker
News Samsung Z3 Tizen-based Smartphone Launched at Rs. 8,490
Share on Facebook
Tweet on Twitter
Deal Alert: 49% Off on ExpressVPN
Touted as #1 VPN in the world, ExpressVPN is now offering 49% off & an additional 3-months of service on its annual plans.

Samsung launched its third Tizen-based smartphone, the Samsung Z3, in India. Priced at Rs 8,490, the phone will be available for purchase starting next week via Snapdeal and offline retail stores. The color options include Silver, Gold, and Black.

Equipped with a 5-inch HD Super AMOLED display, the new phone runs on Tizen 2.4, and features dual-SIM support. Under the hood is a 1.3GHz quad-core Spreadtrum SC7730S processor, coupled with 1GB of RAM. The internal storage is meagre 8GB but it is possible to expand  up to 128GB, if needed more space. 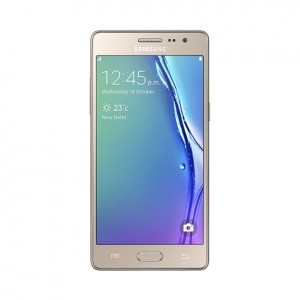 Powered by a 2600 mAh battery, the Samsung Z3 adorns an 8-megapixel primary shooter with LED flash and a f/2.2 aperture. Front-facing unit gets a 5-megapixel snapper. The smartphone weighs in at 137 gs, and measures 141.6x70x7.9mm. It gets the connectivity through 3G, Bluetooth 4.0, Wi-Fi b/g/n, Micro-USB, and GPS with A-GPS.

Samsung has partnered with Rovio and Gameloft to offer couple of pre-installed games. Also the customers can get 1GB of 3G data for free on Vodafone for 2 months. MixRadio access is also included for lifetime.

Commenting on the launch, H.C Hong, President and CEO, Samsung India Electronics, said, “The launch of Samsung Z3 re-emphasizes India’s significance as a key centre for innovation and development on the Tizen operating system, with India being the first country to globally launch the Z3. We were encouraged by the huge popularity of Samsung Z1, the first Tizen OS powered smartphone that sold over one million units within six months of its launch earlier this year.”