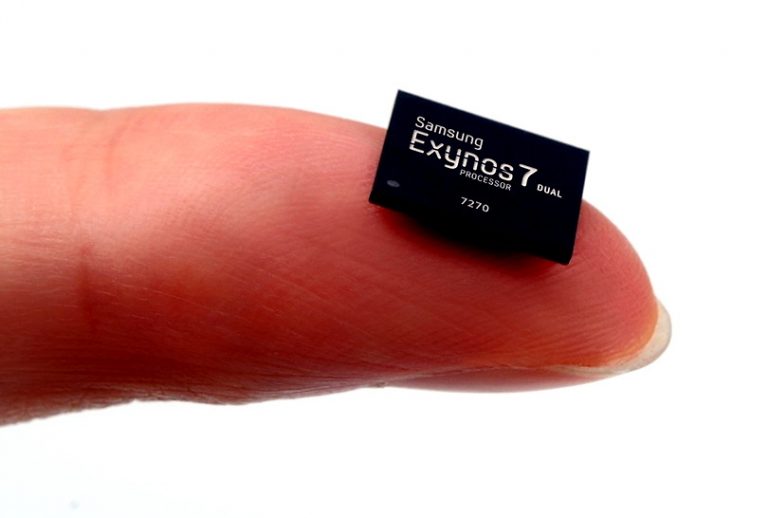 The new 14nm Exynos 7270 SoC is manufactured using the 14nm FinFET process. The company uses its’s packaging technology, the SiP-ePoP (System-in-Package, embedded Package on Package). Samsung claims that its is better performance over its predecessor, and is optimized for wearables. It integrates NAND flash with the processor, using a special heat-resistant properties and a dedicated Power management IC.

The Exynos 7270 is powered by two Cortex-A53 cores, which clock at 1.0GHz. It is 30% more power-efficient than its predecessor. Its features include A Cat. 4 LTE non-CA modem, WiFi, FM radio, Bluetooth 4.2, GPS and GLONASS. The Exynos 7270 comes with a reference platform with NFC and various other sensors which are currently available for electronics manufacturers. The processor supports screens with resolutions of up to qHD (960 x 540) and up to a 5-megapixel camera.

As per Samsung, the slim and compact processor will allow electronics manufacturers to customize the design of the wearable in a more free manner. Also, it is the first in its class to come with built-in LTE. The Gear S3 Frontier was Samsung’s first LTE-enabled smartwatch out of the box. The Samsung Gear S3 came in two variants, the Gear S3 Classic version and a Gear S3 Frontier version. The latest smartwatch is expected to be available in late October.