Samsung SM-W2016, an unknown Galaxy model, has been spotted in the GFX database and gets its power from an Exynos 7 Octa chip with an octa-core CPU. Accompanying the chip is a Mali-T760MP8 GPU and 3GB RAM. Internal memory stands at 64GB and photography needs are fulfilled by a 16MP rear and 5MP front cameras. 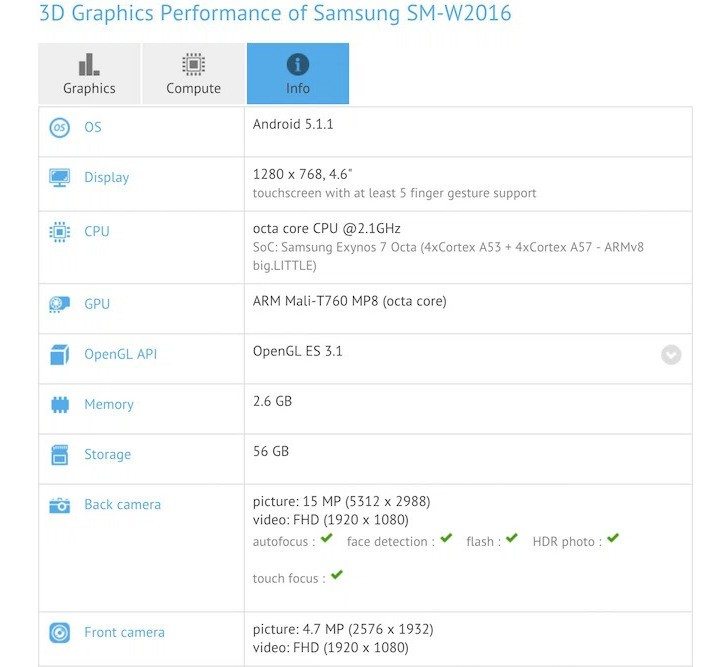 According to the benchmark, the Samsung SM-W2016 will get a 4.6-inch HD screen, but it is quite possible that the benchmark might be carrying a slight error in the informations. This new model of the Galaxy series was seen in the Zauba listings and was imported to India on 6th October for testing. According to the listing, the price of the phone is INR 26,725 (around €360).

Another rumor about the Samsung SM-W2016 is that it might be the Galaxy S6 mini, but this might be a totally baseless rumor. The reason for this is that the Galaxy Golden flip smartphone in Korea carried the model number SM-W2014, while we had also heard about the SM-W2015 (Galaxy Golden 2) being spotted in TENAA once. So an educated guess would say that the just-leaked SM-W2016 might be the Galaxy Golden 3 flip smartphone. The device seems to come with high-end specs, to it will be exciting to see how the market responds to this phone.