Samsung has released four flagship smartphones this year. Two were launched back in March (the Galaxy S6, and the S6 Edge) and the recent two were released last month (the Galaxy S6 edge+, and the Galaxy Note5). Needless to say, these smartphones are powered by the same chipset, Samsung’s own 64-bit Exynos 7420 based on its 14nm technology.

Now, as we wait to see Qualcomm’s upcoming Snapdragon 820 SoC, a new Android device by Samsung has surfaced on Geekbench, the benchmarking website, sporting a processor that’s much more powerful than the Exynos 7420.

The Geekbench records mention the Android-based device as the ‘Samsung LUCKY-LTE’, which could be an upcoming high-end smartphone or a tablet. According to the details revealed, the new device will feature a 4GB RAM, Android 5.1 Lollipop, and 4G LTE connectivity. The device has the Exynos 8890, which is an ARMv8 octa-core CPU, under-clocked at 1.3GHz. It managed to score 4882 points on multi-core tests and 1409 on single-core evaluations, compared to 4382 and 1305 by the Exynos 7420. 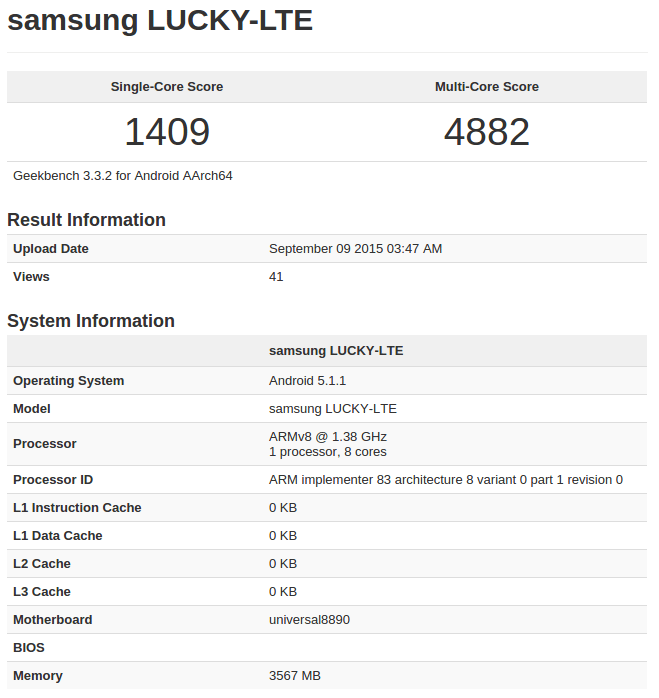 Undoubtedly, this is a flagship device, but it is not confirmed which Samsung lineup of devices will it belong to. The Korean giant has already released its premium devices this year, so it is possible that the Samsung LUCKY-LTE will be seen in the first half of 2016.