The gigantic Samsung Galaxy View tablet was teased at the IFA 2015, and the company has now made it official. For those who don’t know what’s so special about this tab, the Galaxy View sports a huge 18.4-inch TFT LCD screen with Full HD resolution and a pixel density of 123ppi. The tablet is being pushed out mainly as an entertainment device. 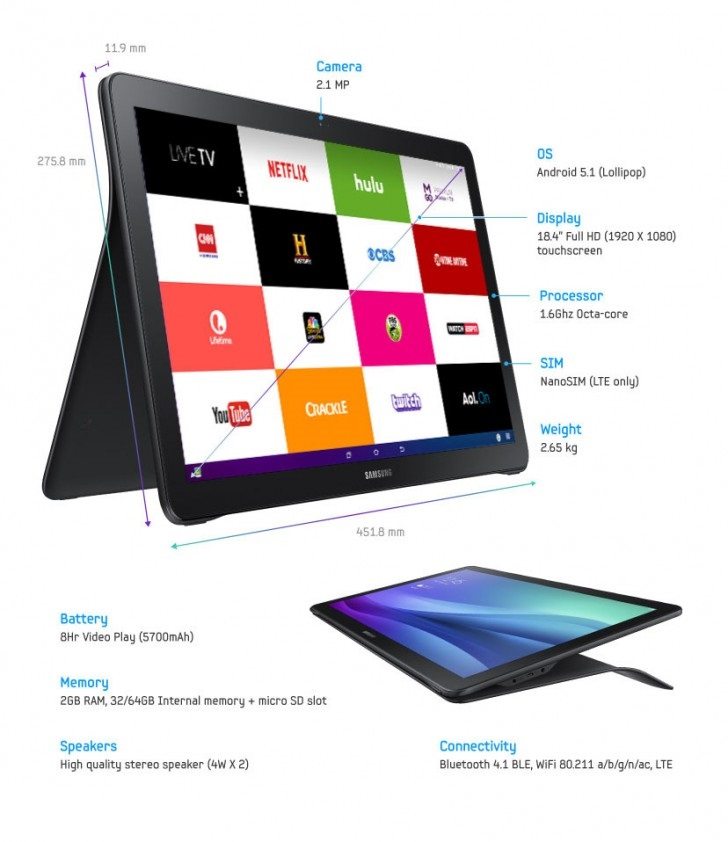 The Samsung Galaxy View measures 275.8 x 451.8 x 11.9mm and weights 2.65kg, which is why it comes with a handle so that the humongous tablet can be carried easily. There’s a two-way stand at the back, while the tablet has got rubber at the bottom to prevent it from sliding. Boasting of a 5700mAh battery, you can watch videos for up to 8 continuous hours on the Galaxy View, though you will still have to charge the tab often. For better entertainment, Samsung has fitted the tablet with dual 4W stereo speakers.

Talking about the processor, the Samsung Galaxy View uses the Exynos 7580 chip and houses an octa-core 1.6GHz CPU along with 2GB of RAM. Users can choose from 32GB and 64GB storage options, which are expandable through a microSD card. A 2.1MP right above the screen helps in video conferencing. Connectivity options on the tablet include 4G LTE with nano-SIM slot, Wi-Fi 802.11 ac, and Bluetooth 4.1 BLE. The tablet runs Android 5.1 out of the box with Media UX on top of it.

Pricing and availability for the Galaxy View hasn’t been revealed until now. But a premature listing at Adorama (cached) suggests the tablet’s price to be $599.