The Mobile World Conference is right around the corner and Samsung is planning to unveil their latest tablet in the Galaxy Tab series. A model number, SM-T819, was spotted at the popular benchmarking site, GFXBench and going by the name, it might very well be the Galaxy Tab S3. It is rumored to be launched along with their flagship smartphone, the Galaxy S7 at MWC 2016. Galaxy Tab 3 is also said to come in two different sizes and the benchmarks clearly indicate the same. 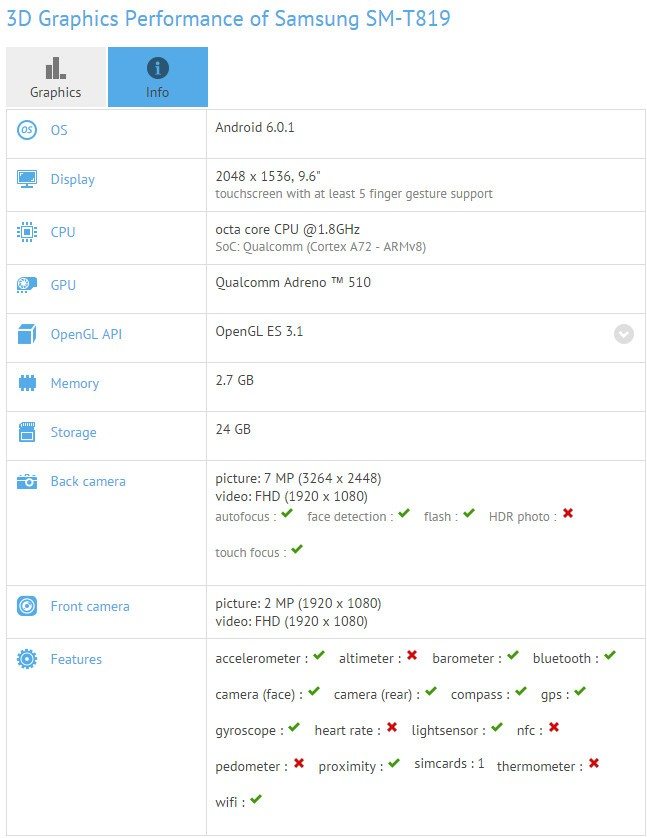 The major difference that has been spotted in the benchmarks is the use of a new processor. The Galaxy Tab S3 has ditched their in-house Exynos processor for Qualcomm’s new Snapdragon 652 processor. Snapdragon 652 is an octa-core CPU that has four high-performance ARM Cortex A72 cores and four ARM Cortex A53 Cores. No information regarding the battery is available as of now. For gaming and other graphics intensive apps, there is the Adreno 510 GPU. Even though the processor is a slight improvement from their Exynos counterparts used in the S2 Tabs, it lags behind the performance when compared to Snapdragon 810.

The other specs of the tablet are similar to the Galaxy Tab S2. The 9.7-inch Super AMOLED display of the Galaxy Tab S3 has a magnificent resolution of 2048×1536 pixels. For storage, there is 32 GB of internal storage and 3GB of RAM. For clicking pictures and shooting videos, there is an 8-megapixel rear camera and a 2-megapixel front camera for selfies. It comes with Android 6.0.1 Marshmallow out of the box and that is one great advantage. The 8-inch version of the tablet is rumored to have the same specs but with a smaller screen and a less capable battery.