Samsung has tasted great success with the Galaxy S6 series, and leaks and rumors around its next flagship, the Galaxy S7, have already started building up. We know that there will be separate variants of the S7 for separate markets. But what comes as the latest piece of information about the phone is that AT&T is already testing the next Samsung flagship!

According to a report by GSMArena, popular leaker @evleaks has tweeted that two variants of the Galaxy S7 are being tested out in the United States. To be more specific, AT&T is testing two variants of the S7, namely the SM-G935A and SM-G930A, which should presumably be the Galaxy S7 Edge and Galaxy S7 respectively. This new leak sounds totally reliable, as it fits in well with the previous rumor that suggested that the S7 would get launched in February 2016, which is the day before the MWC 2016. 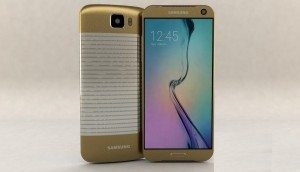 Specifications for the Galaxy S7 are still pretty much under wraps, though we do know that the phone will feature a magnesium build. The phone is also rumored to get features like HiFi audio, USB Type-C, and Force Touch. A recent report also states that half of the S7 units will be powered by Snapdragon 820, while the other half will carry Samsung’s own Exynos 8890 SoC.