Samsung is no doubt the most successful smartphone company in the Android market. The flagship S-series have been raising eyebrows every year, and the Samsung Galaxy S6 series have been a massive hit last year.

However, the Galaxy S6 does have a tough competition, and this time, it’s the BlackBerry Priv. The Priv is new in the Android town, but it surely packs a lot of punch to prove that it’s here to stay.

But what if you had to choose between the Galaxy S6 and the BlackBerry Priv? Let’s compare the major aspects of both the phones and find out which one is really worth your money. 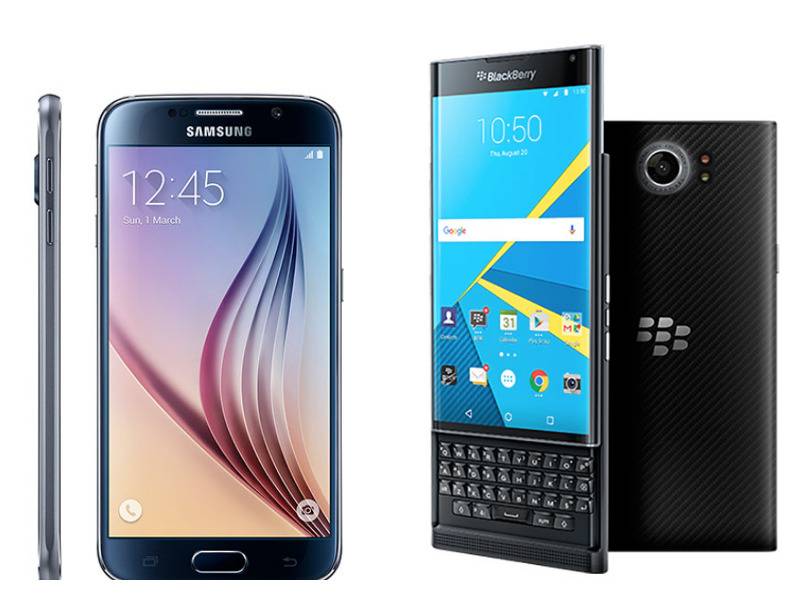 Buyers have always criticised Samsung for not being creative and making dull designs that make all the Galaxy phones more or less the same. But with the Galaxy S6, all the complaints have been seen to. The S6 looks sleek, stylish, and premium with its metal-and-glass design, which looks bold and beautiful.

Meanwhile, the BlackBerry Priv is not a bad looking phone either. It looks subtle and sober, given its executive type formal appearance. It’s a “black privilege” in your hands, and though it’s a bit on the chunkier side, that is because you get a physical QWERTY keyboard. You won’t find the Priv’s design youthful or hip, but the phone has got looks and branding that does not require effort to look great.

The Samsung Galaxy S6 gets a 5.1-inch QHD screen, with the sharpest 577ppi pixel density. This makes the AMOLED display look crisp and amazing. Meanwhile, the BlackBerry gets a 5.43-inch QHD AMOLED screen with a pixel density of 540ppi and protected by Gorilla Glass 4. The Priv wins over the S6 with its curved display, but there’s an S6 Edge too for those who care.

Talking about the processor, the Galaxy S6 gets a 64-bit Exynos 7420 octa-core processor coupled with 3GB RAM and 32GB/128GB storage. Meanwhile, the Priv gets a hexa-core Snapdragon 808 processor with Adreno 418 GPU, 3 GB of RAM, and 32GB of storage (expandable up to 200GB). In performance benchmarks, the Galaxy S6 will beat the Priv by a noticeable margin.

The BlackBerry Priv gets a great 18MP camera with OIS, PDAF, and dual-tone dual LED flash. The aperture is f/2.2, with optics from Schneider-Kreuznach. The front camera is a meagre 2MP sensor. Meanwhile, the Galaxy comes with a 16MP camera with f/1.9 aperture and OIS, which makes the picture quality outstanding, actually better than the Priv. Both the phones support 4K video recording.

The BlackBerry Priv gets a big 3,410mAh battery that will easily take it through the day with a significant amount of charge still left in it. On the other hand, the Galaxy S6 gets a rather small 2,600mAh battery, but it does come with quick charge and wireless charging, so things are more exciting here.

The BlackBerry Priv comes with the now-outdated Android 5.1.1 Lollipop, which is a bit skinned. However, the interface is nice and snappy, and moreover, its the most secure Android software on any phone. The Galaxy S6 is going to get the latest Android 6.0 Marshmallow update soon, so you get many more features on the table.

The Priv costs around $699, while the Galaxy S6 comes with a price tag of $600-$750 depending upon the storage variant and the country.

Let’s keep it clear. If you are a BlackBerry fan, need a secure phone, or are an executive who needs a business phone, go for the Priv. For everyone else who doesn’t mind the budget, the Galaxy S6 is the best bet.

Which one would you choose?