There has been a new addition to the infamous exploits of Samsung Galaxy Note 7. A new YouTube video showing an oven-gloved Burger King employee dealing with a burning Galaxy Note 7 has become viral. The vows of Samsung’s troubled smartphone doesn’t seem to be ending. 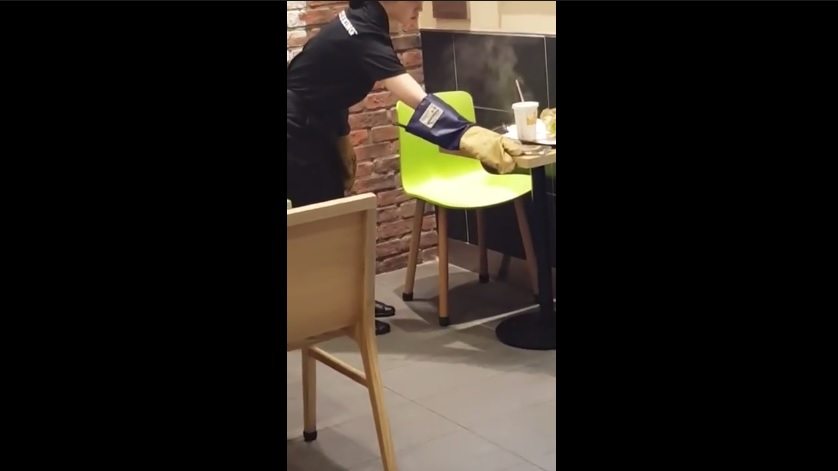 The new video has garnered nearly one million times so far. It was posted on the video-sharing site on Saturday. Two days later, Samsung announced a global halt to sales and exchanges of the Galaxy Note 7 over Safety Concerns.

The new YouTube video has been shot on a mobile phone by a customer. It shows a Galaxy Note 7 burning on a table, at a Burger King outlet in Incheon, South Korea. A Burger King employee can be seen struggling to remove it from the table, while wearing large heat resistant gloves. The smartphone drops to the floor, causing panic among onlookers. Eventually, she manages to picks it up with both hands and walks away from the table. The table is left with a black, charred mark. Watch the video below:

The manager of the fast food joint has requested compensation from Samsung for the damage to the table. A Samsung spokeswoman has confirmed that the device in the footage was indeed a Galaxy Note 7. The company has not released a further statement.

The South Korean company has issued a global recall of its new flagship smartphone early September. This was done as several reports about its lithium-ion battery exploding while charging cropped up. The world’s largest smartphone maker also claimed that it had found the issue with a certain batch of batteries and started a replacement drive. However, it turned into a bigger disaster as reports came that the replacement smartphones were also catching fire. This lead to the halt of production on Samsung Galaxy Note 7.