MobiPicker
News Samsung Galaxy Note 5, Galaxy S6 Edge+ Android Nougat Update Released on...
Share on Facebook
Tweet on Twitter
Deal Alert: 49% Off on ExpressVPN
Touted as #1 VPN in the world, ExpressVPN is now offering 49% off & an additional 3-months of service on its annual plans.

Samsung promised awhile back that its Galaxy S6, Galaxy S6 edge+, and Galaxy Note 5 would be receiving the much awaited Android 7.0 Nougat update in the first half of 2017 and the company seems to have clung to that promise. According to reports, the users of the Galaxy Note 5 and Galaxy 6 edge+ on Sprint have started receiving the Android N over-the-air (OTA) update. 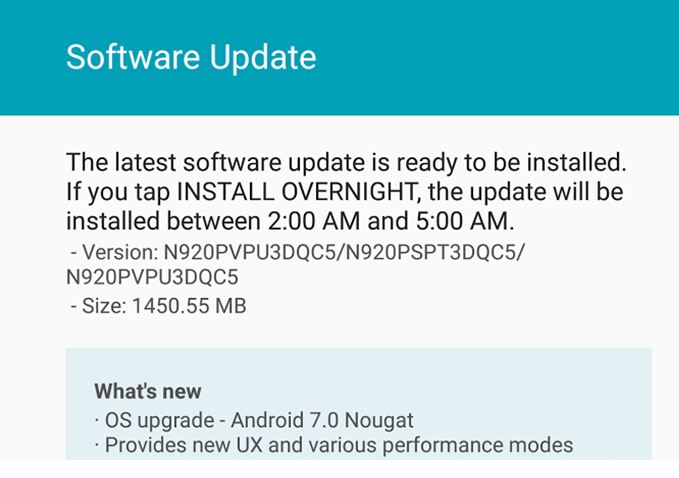 Those of you using one of these two 2015 flagships, check manually if your device is eligible for the update as there is a fair chance that the update is just sitting there waiting for you without initiating a notification.

To manually check the availability of the update, go to Settings >> About Phone >> System Updates >> Check for Update

Regardless of whichever device you are using between the two, make sure you are hooked to a fast and preferably unlimited internet connection as the update file is sized at 1.3 – 1.4 GB.

Once the update is installed, you will have loads of new features to look forward in the new operating systems. These include, but not limited to, customizable Quick Settings shortcut, enhanced notification control such as quick replies and unbundling, as well as Android’s multi-window support, among others.

How to install Android Nougat on your Samsung Galaxy Note 5, Galaxy S6 edge+