MobiPicker
Mobiles Android Samsung Galaxy J7 (2017) Gets WiFi Certified: Specs, Release Date and More
Share on Facebook
Tweet on Twitter
Deal Alert: 49% Off on ExpressVPN
Touted as #1 VPN in the world, ExpressVPN is now offering 49% off & an additional 3-months of service on its annual plans.

Samsung Galaxy J7 (2017) is getting close to the launch day. The mid-range offering from Samsung has been WiFi certified, indicating the imminent launch anytime from now. It has been certified by both Bluetooth SIG and the Federal Communications Commission (FCC). 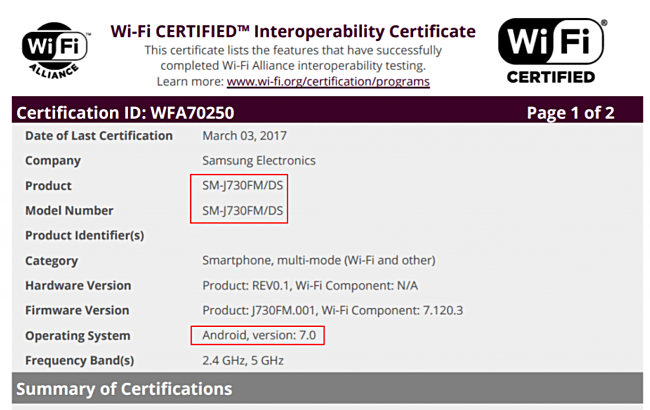 As reported by the reliable tipster, Evan Blass, @evleaks, the smartphone is expected to be launched by Verizon as Samsung Galaxy J7 V in the United States on April 10, and as Galaxy J7 Sky Pro by Tracfone.

Samsung SM-J727, coming to Verizon as the Galaxy J7 V and Tracfone as the J7 Sky Pro, among others. pic.twitter.com/nNa2ciniLE

However, another handset with model number SM-J727P appeared on Geekbench site with different configurations. It featured a Qualcomm Snapdragon 625 processor clocked at 2.21 GHz with 2 Gigs of RAM. Rest of the specs were identical, so we might have two versions of the same phone.

Camera department of Samsung Galaxy J7 (2017) will comprise of 8 MP rear and 5 MP front shooters. It will come with 16 GB of internal storage, further expandable via micro-SD card. Still, all these specs info aren’t confirmed by Samsung, so it’s best to take all this information with a pinch of salt.

As for the design is concerned, it resembles the recently launched A series smartphones with a camera strip on the back. The curved screen does lend a premium feel to the mid-ranger.

Do let us know what you think of the Samsung Galaxy J series in the comments section below.