Samsung Galaxy A Series 2017 editions are out and running. Now, it’s time for J series to seek some light. Samsung Galaxy J5 (2017) which was spotted on the WiFi Alliance (WFA) for WiFi Certification last month has now appeared on GFXBench and GeekBench benchmarking websites. 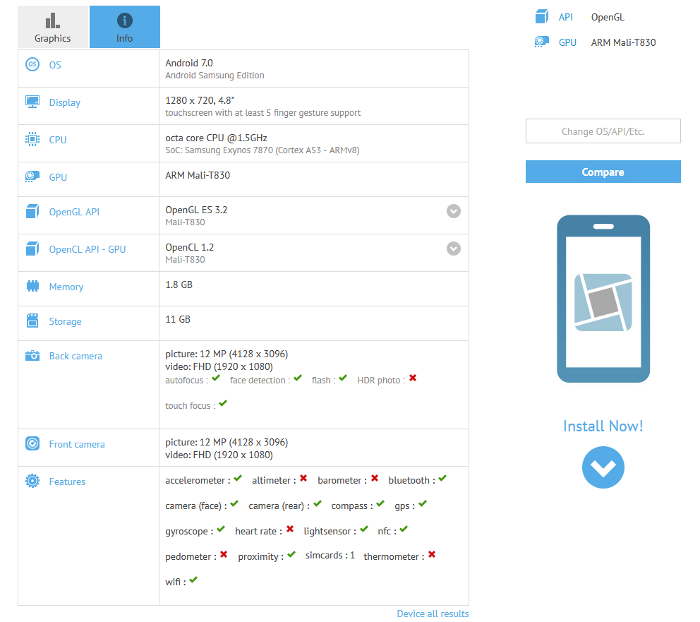 Benchmarking websites are a good source to learn specs of an upcoming device, and the same can be said about Galaxy J5 (2017). According to the listing on GFXBench, Samsung Galaxy J5 (2017) will feature a 4.8-Inch HD display with 1280 X 720 pixels resolution. The smartphone will be powered by 1.5 GHz octa-core Samsung Exynos 7870 processor and 2 Gigs of RAM. Internal storage for Galaxy J5 (2016) will stand at 16 GB with the expandable option. It will boot Android 7.0 Marshmallow with Samsung UI on top.

As for the camera, users will get a 13 MP shooter on the back, and a 13 MP one on the front too. Connectivity wise the handset will house Bluetooth, GPS, NFC, and WiFi. 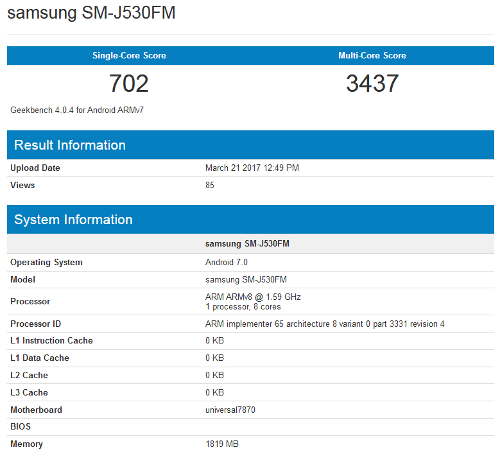 The listing on Geekbench had Galaxy J5 (2017) score 702 points in the single-core test, while 3437 points on multi-core test. This one too resembled similar configurations for the upcoming Samsung device. Another common thing among the benchmark website’s listing was the model number. Both the listing carried model number SM-J530 for Samsung Galaxy J5 (2017).

Last year, Samsung upped the design aspect of J series, hence, it will be interesting to see if Samsung changes a few things or sticks to the same design from 2016.