MobiPicker
News Samsung Galaxy J1 priced at INR 7,190; available at Amazon India
Share on Facebook
Tweet on Twitter
Deal Alert: 49% Off on ExpressVPN
Touted as #1 VPN in the world, ExpressVPN is now offering 49% off & an additional 3-months of service on its annual plans.

The Samsung Galaxy J1, a budget-oriented smartphone of the company’s J series, which was unveiled a few weeks ago, has been listed for sale on Amazon India today. The smartphone is priced at just INR 7,190, which seems worth to buy.

The Galaxy J1 sports a 4.3 WVGA display and powered by a 1.2 GHz dual-core processor. It has 512 MB of RAM and 4 GB of internal storage which can be expanded up to 128 GB via microSD card. The smartphone comes with 5 megapixel camera at rear and 2 megapixel front facing cam. The phone is blessed with all basic features like Wi-Fi, Bluetooth, GPS, Wi-Fi Direct etc. A 1850 mAh battery powers on the apparatus and claims 10 hours talktime on 3G network. 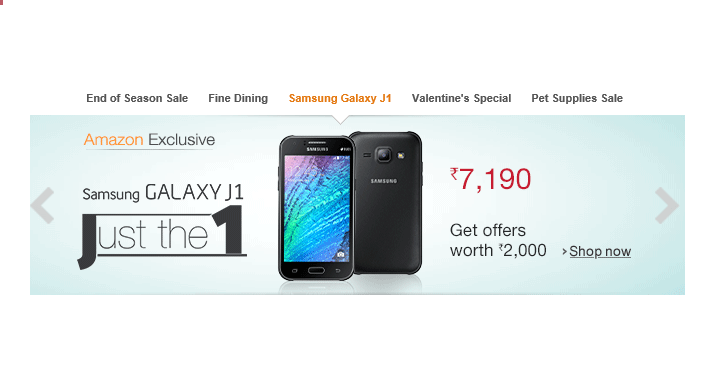 If you are searching for a budget-phone from famed brand, then Galaxy J1 might be a good choice for you. Check out the smartphone on Amazon India.