We have been hearing about the Samsung Galaxy A9 since a lot of months now, and the phone is slowly heading towards launch. The A9 was certified by Bluetooth SIG recently, and now it has been spotted on GeekBench carrying the code-name “Samsung SM-A9000”. 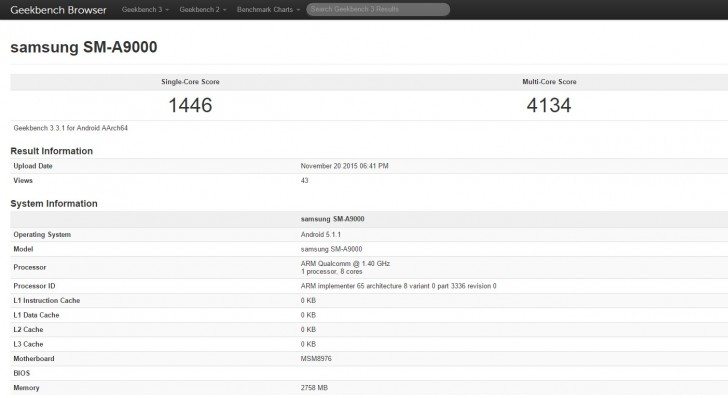 The Galaxy A9 has arrived at GeekBench yesterday and features the Snapdragon 620 (MSM8976) SoC. It has got a dual quad-core CPU (big.LITTLE arrangement), with four being Cortex-A72 cores and the other four being Cortex-A53 cores. Stats show that the chipset scores a good 1,446 points in single core tests.

The Samsung Galaxy A9 is touted to get 3GB RAM, 32GB internal storage, Adreno 510 GPU, and a 5.5-inch Full HD display. Data from the Indian import-export site Zauba suggests that the A9 might get a 6-inch screen.

Meanwhile, the 2016 Editions of the Galaxy A3 and Galaxy A5 have already been certified by FCC, and the Galaxy A7 (2016) is on its way too. Samsung is quickly updating its A-series, and looking at the developments, we think it’s going to be very profitable for the company.