Samsung Galaxy A9 was unveiled in China last week, but important details like pricing and availability were left unattended. Well, if we believe a screenshot leaked on Chinese Weibo site, the Galaxy A9 will cost RMB 3,199 in China, which is around $495. Unfortunately, the details pertaining to the availability of the phone are still not revealed. 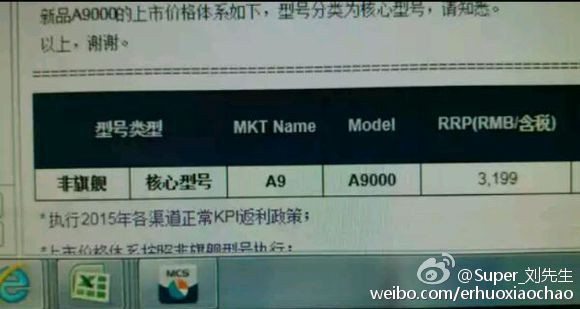 It is not necessary that the phone will carry the exactly same price in the international markets. Going by the previous trends, the Galaxy A9 is expected to carry a lower price tag than the conversion value of Chinese price. Hopefully, Samsung will soon announce the official price as well as international availability for the handset.

For those who are not aware, the Galaxy A9 features a 6-inch FullHD display and is powered by the Snapdragon 652 chipset (formerly known as SD620). Other features include 3GB of RAM, 32GB of expandable memory, a 21-megapixel rear camera, an 8-megapixel front-facing shooter, and a 4,000mAh battery.