The Samsung Galaxy A8, which has been leaked several times in last few days. The specifications, photos, hands-on video all have been leaked except a release date and price tag. But that was until now, a new leak on the phone claims that Galaxy A8 will be hitting the markets in China on July 17 at the equivalent price of $494. 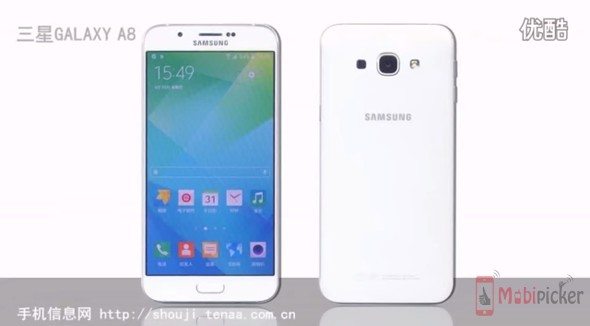 The top-end device from A-series comes with a 5.7 inch display with a resolution of 1080 x 1920 pixels, and is powered by Qualcomm’s Snapdragon 615 octa-core processor having four Cortex A53 cores, clocked at 1.7 GHz and another four at 1.0 GHz. Featuring a 16 megapixel rear camera with f/1.9 aperture and a 5 megapixel front-facing camera, the Galaxy A8 packs 16GB of expandable storage, 2GB of RAM, and a 3,050mAh battery.

There is no word when the Samsung Galaxy A8 will launch in other countries. It is expected that Korean company may announce the global roll-out schedule during the launch event in China, which is slated for July 17th. Till then check out other stories on MobiPicker and stay tuned.