When we are talking about Samsung company every new release comes with its own sets of myths and myth busters and the Samsung Galaxy A8 has its fair share of limelight. It is a hot bed of speculation regarding its release which is credited with the thinnest smartphone yet but the sun is shining high and bright regarding its passing TENNA certification with flying colors.

The Chinese governing body on telecommunications has certified a smartphone with model number SM-A8000 which is popularly known as Samsung Galaxy A8. The pictures below show a phone which is similar to the one in the previous hands-on photos. 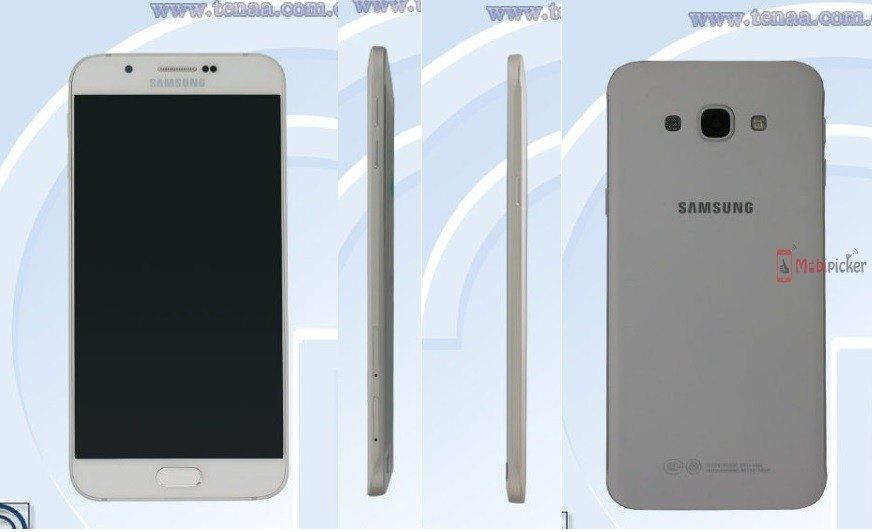 The TENAA hall of fame list confirms that the Samsung Galaxy A8 will sport a massive 5.7-inch AMOLED display which supports a Full HD resolution, which is a benchmark in itself.

Though Samsung has been mild on naming the device specifications absolutely but one thing for sure is that it supports an octa-core processor which is coolly clocked at 1.5GHz. This figure is slightly below Snapdragon 615 which is at 1.7 GHz as specified by Qualcomm. The on board RAM is 2GB and comes with a 16GB of internal storage. As far as micro SD cards are concerned it can take up to 128GB capacity.

Although the back snappers are listed at 8MP but we will bet our money on 16MP as its gallant predecessor Galaxy A7 has a 13MP main shooter and going by commonsense a downgrade is out of question. The front 5MP camera is ready to shoot cool selfies and long video chats.

Samsung Galaxy A8 dimensions measures 158 × 76.77 × 5.94 mm, which gives it the coveted title of thinnest smartphone. The new phablet is impressively light and weighs only 142gm. The battery is 3,100mAh capacity promising long hours of work and entertainment. We would like to have a clap or two for the the engineers at Samsung lab to design such a thin and light body encased smartphone.

The LTE capable smartphone will run Android 5.1 operating system out of the box.

There is no confirmation on the launch of Galaxy A8, but it should not take more than a month or two from now.