Samsung Galaxy A7, the chief smartphone of Galaxy A lineup and thinnest phone of the company, has been launched in India for INR 30,499 ($491). Last month, when the Korean company launched Galaxy A and E series in India, the Galaxy A7 was not in the lineup and become a topic of debate whether it would be launched in the country or not. But now, the Galaxy A7 is available to buy on company’s official online Samsung India eStore.

The Galaxy A lineup introduced metal unibody for the company’s smartphones, and the Galaxy A7 is the most high-end device of the series. The flagship features a 5.5 inch Super AMOLED display with 1440×2560 pixel resolution, and powered by a 64-bit octa-core Snapdragon 615 processor. The apparatus has 2 GB of RAM, 16 GB internal storage, 4G LTE Cat. 4 connectivity, and a 2,600 mAh battery. The smartphone runs Android 4.44 KitKat, which might be upgraded to Android 5.0 Lollipop soon.

The Galaxy A7 can take of your selfies with a 5 megapixel front snapper, and a 13 megapixel rear camera captures 4128 x 3096 pixels image and 1080p videos. 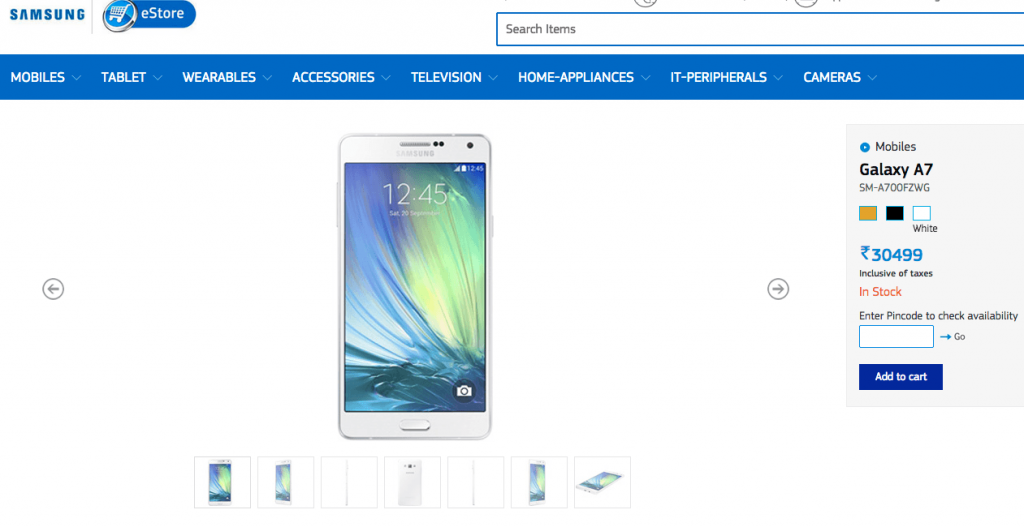