Recent rumor suggests a new smaller iPhone form factor is one its way, named iPhone 6c. Unlike its predecessor iPhone 5c, iPhone 6c handset is rumored to be more premium as it would sport a metal body. It could be released in the first half of next year, may be along with the next iPad successor. 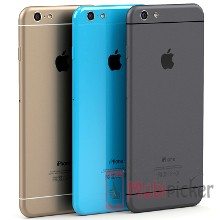 As of now no additional information has been released other that the alleged leaked chassis and no specs or benchmarks have hit the rumor mill. As per the analyst memo to clients that claimed a metal chassis, “although iPhone 6C is designed as an extended version, it still uses metal casing based on Apple style,” alluding to the 6c as an “extended version” of the current iPhone 5c model. All said and done, if the 6c is going to be release early next year, the specs would have to be upgraded given the fast pace of the mobile industry, who knows what will happen by then.

Among other rumors, we have already heard about Apple choosing Sony’s camera sensor for the handset and supposedly it is already been mass-produced. Another interesting leak came up by the Chinese tech blogosphere, suggesting that the new iPhone would sport a 1715 mAh battery pack, which is an improvement over the 1500 mAh piece in the iPhone 5c. We were able to get a picture of the same (given below), this might be Apple’s strategy of getting into smaller-premium segment, tell us what you think in the comments below.