Black Holes have always remained an enigma. The only person who managed to provide a set of mathematical equations that today are helping scientists unravel the mysteries of black holes is none other than India’s mathematical genius Srinivasa Ramanujan – The Man Who Knew Infinity. In 2012, a US Scientist finally proved an unproven mathematical relation expressed by Srinivasa Ramanujan which holds the key to the mysteries of black holes. And now, recent research has found something ground-breaking, one that’s said to solve Universe’s greatest mystery.

Observation probes have been targeting globular clusters rich with densely packed stars to look for IMBH. 47 Tucanae is one of the very few regions of densely packed stars, which makes it the ideal place for IMBH formation. The research shows how Intermediate-Mass Black Holes have long remained hidden from our view and how they can be discovered indirectly by examining the motion of stars within globular clusters.

If the existence of IMBH is confirmed, it could explain the formation of super-massive black holes. The Intermediate-Mass Black Holes are thought to be the seeds of super-massive black holes. As such, this finding could very well solve universe’s greatest mystery – that of black holes and their formation. Several questions remain unanswered, but the significance of the latest discovery can in no way be undermined – it’s the strongest evidence so far for the existence of Intermediate-Mass Black Holes and one that will throw light on the mysteries of black holes that have continued to elude scientists for so many years. 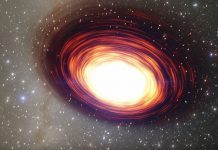 First Picture Of A Black Hole Finally Snapped; Sagittarius A* Captured In All Its Glory