MobiPicker
Mobiles Android How to Remotely Turn Off Android Phone by Sending SMS
Share on Facebook
Tweet on Twitter
Deal Alert: 49% Off on ExpressVPN
Touted as #1 VPN in the world, ExpressVPN is now offering 49% off & an additional 3-months of service on its annual plans.

If you own a smartphone, there is a 75% probability that it is an android device. Android devices are the most popular in the world of smartphones and tablets. The popularity has attracted mobile application developers to build a wide range of applications for this open source operating system.

Have you ever wished you could switch off your device remotely? Probably you left it at home and you do not want your sneaky girlfriend to access it. Fortunately, you no longer have to simply imagine this possibility. With the necessary app and a little know-how, you can remotely switch off Android phone by sending SMS from your friend’s phone. 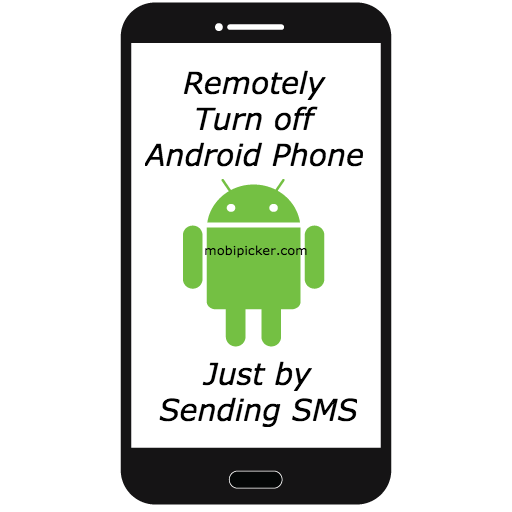 What do you need?

To start with, you need to root your device (you can read here how to root android smartphone). In Android devices, rooting is simply unlocking the operating system so that some unauthorized functions can go through. Rooting is in some cases is an infringement of Android’s terms and condition. It is a tricky process because one wrong move can render your device useless. However, with rooting apps such King Root or Android Root, the process is easy, even for a tech dummy.

You also need the Remote Power Off app to turn off Android device via text message. It is available for free on Google Play Store. Once you have the application and a rooted device follow the following guideline.

The Remote Power Off App

For you to be able to remotely shut down your phone, you need to setup the app first. The set-up process is simple.

Step 1: Go to the menu and open the Remote Power Off app.

Step 2: After opening the app, it will require you to set the secret code. The secret code is a combination of digits and letters that you will send to your device to turn it off. You will be required to enter the current code. By default, the current code is ‘null’. You will then enter the new code. The new code can be any combination of your liking. You will then re-enter the new code. This code will help you switch off phone by sending SMS.

It is wise to jot down the secret code for reference, in case you forget it. The secret code is case sensitive; remember where you put capital letters.

Turning off your device via text message

Do you remember your secret code? The secret code and a friend’s phone are all you need for the final steps. When you need to remotely switch off your android device;

Your phone will automatically shut down after receiving the code. It is that simple.

It cannot be more convenient to remotely turn off your smartphone or tablet. You only have to remember a code, which you came up with. The only seemingly difficult part is the rooting process. If you are not sure you can do it on your own you can seek the help of a smartphone expert.