Not to anyone’s surprise, the Korean giant Samsung still rules the Indian smartphone market with an astounding share of 25.1 percent. This astounding share can be accredited to the launch of the updated versions of the Samsung J7, J5, and J2. 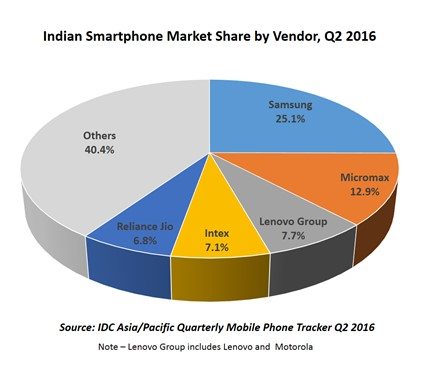 Samsung was followed by the indigenous smartphone maker Micromax with a share of 12.9% thanks to its new devices like Yu Yunicorn and the Canvas 6 series.

The third and fourth position have been secured by Lenovo with 7.7 percent market share and Intex with 7.1 percent respectively. However, the highlight of this report is the fifth position holder in this list, Reliance Jio. Reliance Jio has become a country-wide phenomenon in a very short span of time. Reliance Jio preview offer featuring unlimited 4G internet, VoLTE calls, and SMSes has already become the darling of the masses. The sale of LYF smartphones coming with the Jio Preview offer have sky-rocketed over the past few months and the meteoric rise of Reliance Jio in the sales charts is nothing but obvious.

Reliance Jio has made a great debut in the Indian smartphone market and is faring really well. Let’s see what lies in the future of this amazing initiative. Till then, stay tuned.