Ever since Apple introduced the red iPhone, it’s as if the whole smartphone world has entered a carnival of Red. No doubt, red has its own distinctive charm and a dedicated following that do not mind shelling out a heftier amount to have a handset that stands out. Perhaps, with that into consideration, Chinese smartphone maker UMIDIGI (formerly UMi) has followed Cupertino’s lead by rolling out the Red UMIDIGI Z (UMi Z). 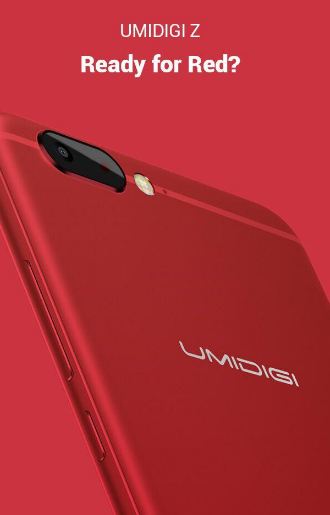 The company believes the hot, strong and stimulating appearance of the color red represents excitement and energy, thereby appealing to consumers from pretty much all age groups — the youth, in particular.

The Red UMIDIGI Z is powered by the latest MediaTek processor, the Helio X27 deca-core Soc clocked at 2.6 GHz, aided by 4GB or RAM. The handset flaunts a 5.5-inch display with 1080p resolution, a 13MP camera on the rear panel, as well as a 13MP front camera for video calling and selfie.

Other important under the hood specs include 32GB of native storage which can be further expanded to 256GB using a microSD card. The battery capacity stands at 3780 mAh and it supports fast charging.

Being the special edition, the Red UMIDIGI Z (UMi Z) is priced at around $269.99 which is a bit higher compared to the regular UMIDIGI Z (UMi Z) which sets you back $229.99. The handsets are currently available only in licensed stores.