MobiPicker
Android Applications Quote is a New RSS Reading App, Feedly Alternative by Developers of...
Share on Facebook
Tweet on Twitter
Deal Alert: 49% Off on ExpressVPN
Touted as #1 VPN in the world, ExpressVPN is now offering 49% off & an additional 3-months of service on its annual plans.

MVilla, the developers of the awesome Twitter client Fenix, have released a new app called Quote that’s an alternative to Feedly. Quote is an RSS feed reading app that makes Feedly’s services even more attractive. It is easy to set up and very easy to login using Feedly, Google, or Facebook. 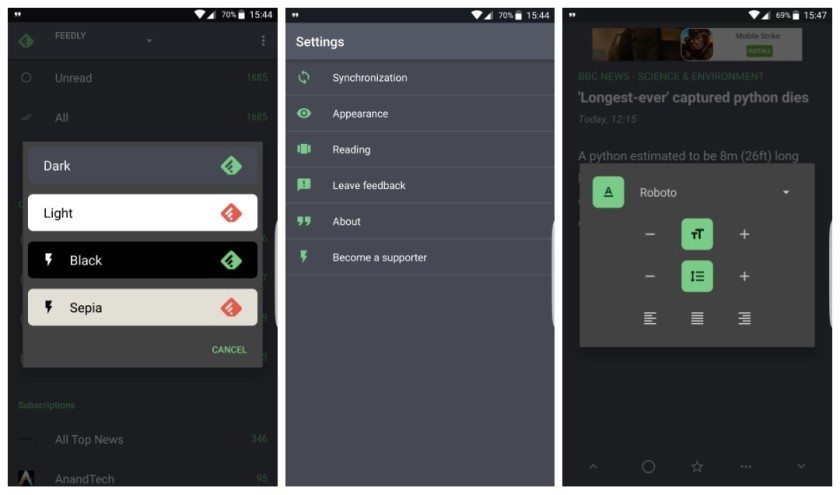 Once you are logged into Quote, you will find all your unread stories at the top along with your starred stories. Then there are your collections and subscriptions in alphabetical manner. You can simply press and hold on a source to unsubscribe it. To add a new source, you can just tap the three dots in the corner and select ‘add new content’, and then tap the ‘+’ button on any source you want to add.

You can simply perform a vertical or horizontal swipe to go to the next story. Just like a lot of other reader-type apps, you will see that the stories are void of a lot of their layout, ads, formatting, etc. to give then a more text-focussed look.

But Quote does a really good job as a reader, and you get a lot of customization options. You can mark content automatically while reading and scrolling past it. The bottom toolbar lets you star a story, mark it, open the readability view for seeing only the text, copy or share the stories, etc.

Quote offers a bit of customization, like changing themes from dark to light or vice versa. But if you want to lay your hands on the sepia or black themes, you’ll have to pay £1.99 ($2.49) to upgrade to the premium version of the app. With the upgrade, all the banner ads are gone and you can add multiple accounts.

Overall, Quote is a really smooth app with nice gestures to control it. The design is good and the app looks attractive with all the basic features you would expect from an RSS reader app. If you can pay for the premium upgrade, go for it because the banner ad on the top of the app looks really odd.

You can download Quote RSS Reader app for Android from the below-given source link.