Pretty Little Liars Season 8 has been canceled. It has been revealed earlier that Season 7 is the final one. The final episode that aired was titled as ‘Till Death Do Part’ and it has revealed the identity of A.D. aka Uber A.

Episode 20 made a major revelation that Spencer Hastings has an evil twin called Alex Drake aka A.D.! The revelation of A.D.s identity has come as a surprise to many fans. Some of them were thrilled to know the secret while some did not appreciate the revelation.

Recently creator of Pretty Little Liars, I. Marlene King and actress Troian Bellisario has talked about fans reactions posted on social media. King says to TV Line, “I had to stay off social media [after the finale] because people who don’t like things are always more vocal than people who do.”

She continues,“…We did our best, and you can see how much care, attention, love and hard work was put into that episode — not just from me, but from the actors and the crew.” She also explained, “…Everybody worked their butts off, and it was a labor of love. Hopefully, people will just take a breath and absorb it over time. Maybe even watch it again!”

Troian Bellisario aka Spencer Hastings aka Alex Drake said, “You can’t satisfy everybody,” she continues, “I’ve had to consciously remove myself from looking at people’s responses,” reported the aforementioned source.

She also reveals to the website, “Like, this is a story our creator came up with, and it’s my job to tell that story to the best of my abilities. So when someone says you were horrible, it’s hard not to take that in.”

Will There Be A Pretty Little Liars Spinoff?

Pretty Little Liars Season 8 will not happen. But a potential spin-off might happen. Showrunner I. Marlene King once teased in an interview with Entertainment Tonight about the possibility of a spinoff. She said, “It’s not a for sure thing, but there’s some ideas swirling around out there.”

She added, “Everybody knows I love this world. I love to play in this world and I love these characters, so it would be fun to keep a few of them moving forward in their lives,” as per the aforementioned source.

Recently, she told TV Line about a spin-off that, “It’s a real conversation that is happening, but it doesn’t have a definitive answer yet.” 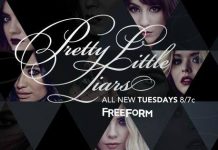