MobiPicker
News ‘Pretty Little Liars’ Season 7 Episode 18 Spoilers, Release Date & Promo...
Share on Facebook
Tweet on Twitter
Deal Alert: 49% Off on ExpressVPN
Touted as #1 VPN in the world, ExpressVPN is now offering 49% off & an additional 3-months of service on its annual plans.

“Pretty Little Liars” Season 7 Episode 18 will see the return of Toby and a possible reunion with Spencer. Interestingly, Aria will accidentally come across something horrifying. Check out details about the release date and watch the promo!

“Pretty Little Liars” Season 7 Episode 17 focused on the relationship of yet another couple. The episode on Freeform showed that Caleb and Hanna get engaged and the former is very much eager to tie the knot with his girlfriend, reports International Business Times.

Caleb is so eager to make Hanna his wife that he is ready to marry her immediately if they could get a license.

In the upcoming episode, Toby will be seen returning to Rosewood and there is a strong possibility that he may reunite with Spencer. Now the question is will they take their relationship further and culminate it into marriage like Hanna and Caleb or Aria and Ezra.

The footage shows that Spencer and Toby are going to make it out together, but speculations from fans suggest that Toby might be killed in “Pretty Little Liars” Season 7 Episode 18. According to the speculations, the showrunner has titled the episode aptly as “Choose or Lose” indicating that there is one massive shock coming up.

Aria’s Collaboration May Be Revealed

According to Blasting News, a surprising source will arrive in the next episode in response to the collaboration of Aria with A.D. Although nothing is revealed about who exactly will be the shocking source, it will surely bring a new twist to the “Pretty Little Liars” Season 7 Episode 18.

The source also says that Aria will stumble upon something horrifying. The promo does not reveal what exactly it is. Fans can only get to see all the details when the Episode 18 airs on June 13, next Tuesday night on Freeform at 7 pm Central time. 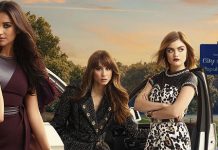 It’s official! ‘Pretty Little Liars’ Will End After The Season 7